Video of this song from youtube
Average Rating : 3.92
Total Vote(s) : 91
Please rate this song between 1 star and 5 stars (5 stars being the best). Just move your mouse on the stars above and click as per your rating. Your rating will really help us to improve our website. 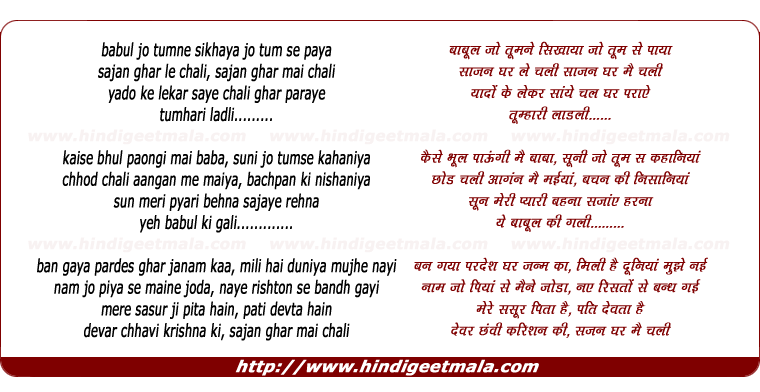 Comments on song "Babul Jo Tumne Sikhaya Jo Tum Se Paya"
spunkygirl1987 on Monday, October 12, 2009
i am going to get married soon..so I can imagine how painful this moment will be for me :(..its like a weird dilemma you get caught in.but yet no choice..you have to go with your husband
AksheeShadow on Wednesday, November 12, 2008
It is said that girls are the lakshmi of house(goddess of wealth) so when
she gets married it is believed as she is going away she gives as much as
she can back to her father's house so that the wealth and prosperity
remains after she is gone and takes one fist of grain tied in her saree.
When she enters the new home she is supposed to throw the grain in the
house before she enters or gently tupple the vessle full of rice grains
which implies wealth and prosperity in new home.

Damian Oswald on Sunday, April 25, 2010
These days its the guy who has to leave his parents, not the girls - and
the guys these days are too gutless and weak to do anything about it. The
guy spends more time at his in-law's house than he does his own because
wife tells him to. You all know its the truth so don't deny it.

mayuri966 on Thursday, March 18, 2010
i love this song beacuse i am in singapore, still studying but missing mom dad, and always miss them , the role which they are doing, my mom dad is same. lovely, carefull, peacefull, understandable,pls forgive me if i have done anything wrong
Neeti Kaur on Monday, April 05, 2010
It is so sad that when bride was inside the house , her family members were
with her and after she crossed the door, her in-laws join in and bride's
parents just look at the bride. I always feel that when any of my sis' get
married.