Video of this song from youtube
Average Rating : 4.08
Total Vote(s) : 13
Please rate this song between 1 star and 5 stars (5 stars being the best). Just move your mouse on the stars above and click as per your rating. Your rating will really help us to improve our website. 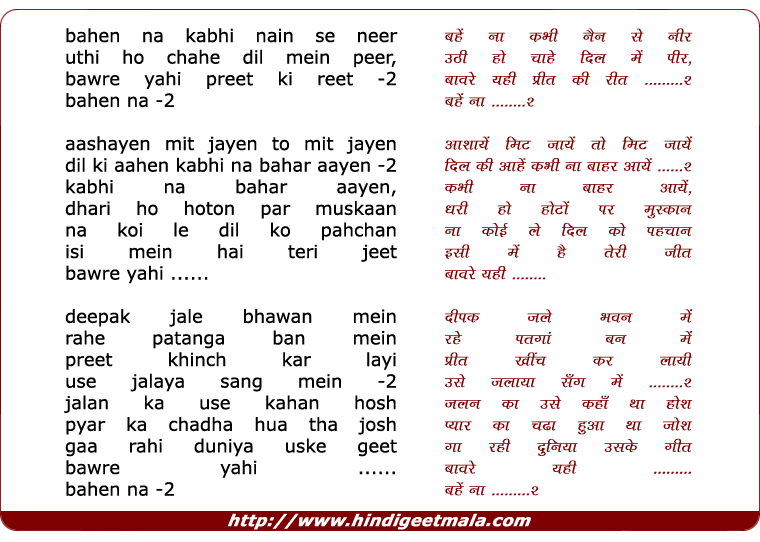 Ramesh Thakrar on Monday, May 12, 2014
From the film Vidya, made in 1948. Can you believe it that it was made so
long ago? The song is still very popular. One does not associate Dev
Anand with Mukeshji.﻿

kirti kumar Khanna on Wednesday, September 25, 2013
S .d burman was an ordinery man . to prefer bengali he gave chans to
kishore and same with his son r, d burmen .kishore was nowhere near mukesh
chand jee

durlabh kolhe on Monday, November 23, 2009
recently i have seen this film on b4you channel. however this song is heard
by me several times on radio.

isurukddd on Sunday, June 26, 2011
The heroine in this clip z aya Banerji. Who was atop star in 1930's Sagar Film company. She did a lot with Motilal and Surandranath.
View all 13 comments related to song Bahe Na Kabhi Nain Se Neer Uthi Ho Chahe
Popular Links on HindiGeetMala