Video of this song from youtube
Average Rating : 4.28
Total Vote(s) : 18
Please rate this song between 1 star and 5 stars (5 stars being the best). Just move your mouse on the stars above and click as per your rating. Your rating will really help us to improve our website. 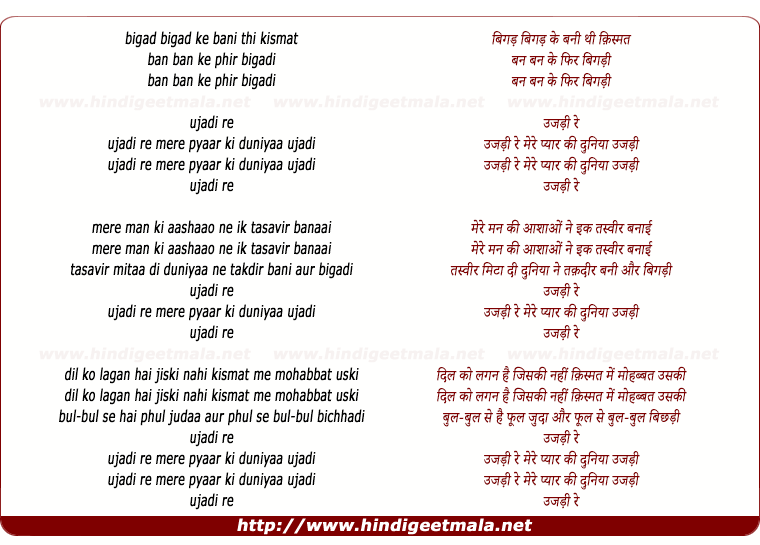 Comments on song "Bigad Bigad Ke Bani Thi Qismat, Ujadi Re"
rameshpuri1 on Monday, May 02, 2011
i think this great song composed by anil biswas was written by dr. safdar aah..please youtube lovers of hindi films correct me if i am wrong..RG
kirti kumar Khanna on Wednesday, November 24, 2010
music director madan mohan roshan sahib sajjad hussain an this great man
ANIL biswas , no words to appreciat their love for music and thear sheer
hard work for composing music in so many indian film sab ke charno me
pranam

Surender Bhutani on Friday, June 07, 2013
A lovely composition of Anil Biswas. Rajinder Krishan wrote this beautiful
lyric. Indraneel Mukherji has made some pertinent remarks about Lata I
agree with him.. Dr Surender Bhutani Warsaw (Poland)

Jagjit Singh Ishar on Sunday, February 15, 2015
Picturised on Madhubala with full feelings of anguish, she was so talented.
her pairing with Devanand was very beautiful & successful.﻿