Video of this song from youtube
Average Rating : 4.48
Total Vote(s) : 81
Please rate this song between 1 star and 5 stars (5 stars being the best). Just move your mouse on the stars above and click as per your rating. Your rating will really help us to improve our website. 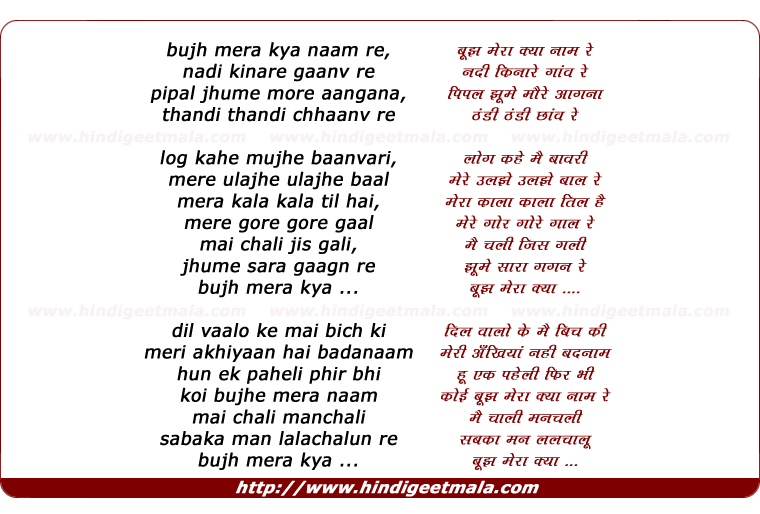 Comments on song "Bujh Meraa Kyaa Naam Re"
msaxy9 on Tuesday, November 10, 2009
Thats Meenu Mumtaz the actress who played Mandodari in the popular TV serial Ramayana.
tuffuptube on Thursday, February 25, 2010
Though I got to see the Video sometime in the 80's, I used to hear these on
Radio. Its so enchanting to go down memory lane and relive those lovely
days. The music of this song is like wine.. It matures towards the end.
Wish the song never ended !!

chotutalk on Wednesday, October 21, 2009
The actress in this movie CID is SHAKEELA, her other heros were, ajit, shammi kapoor, ranjan, Mahipal etc.
After her marriage she is settled out of India, She is very simple and pretty.
Satish

Bipul Roy on Friday, November 11, 2011
FIRST STANZA of The LYRICS: Try to Understand What's my Name... Living
Rural-Riverside It's a Fame. On my Yard Banyans are Dancing. Cool
Shadows of them are Romancing..