Average Rating : 4.39
Total Vote(s) : 31
Please rate this song between 1 star and 5 stars (5 stars being the best). Just move your mouse on the stars above and click as per your rating. Your rating will really help us to improve our website. 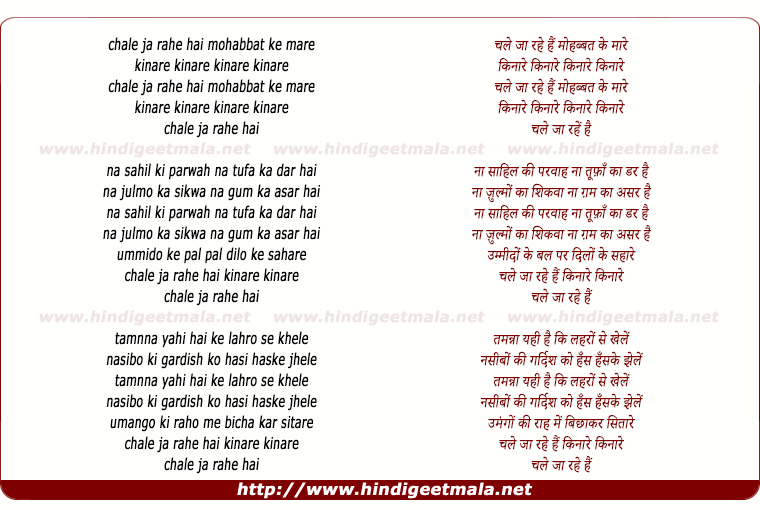 Comments on song "Chale Ja Rahe Hai"
R Nanjappa on Wednesday, June 04, 2014
This is in reply to Mohan Doshiji. The chemistry between Dev and Meena was
indeed good. This song written by Nyay Sharma is also gem as all the songs
and music of this film. It seems there was death or murder of some person
connected with this film during its making; police case lingered on for
about 10 years, so the film was completed very late. By that time, the
image of both Dev and Meena had developed on different lines and become
set. So, probably they were not paired again. This film's music is
wonderful.﻿

Naveen Dighe on Wednesday, December 07, 2011
WONDERFUL UPLOAD AMITJI DIDNT KNOW THE LYRICS WERE BY NYAYA SHARMA WAS
UNDER IMPRESSION THAT THE LYRICS OF KINNARE KINNARE WAS WRITTEN BY JAIDEV
FAVOURITE SAHIRSAHAB ALL THE SAME THE WORDS SEEM LIKE THE GREAT SAHIR,S
POETRY

Moe Ali on Saturday, July 04, 2015
MannaDey sings a beauty. Longivity, faith, love are the hallmarks of this
most romantic song. It's eternal approach, faith, love and anticipation
amazingly put together by Nyaaye Sharma and Jairaj﻿

amashaize amavasya on Monday, October 08, 2012
oh.what a masterpiece of music.Maestro Jaidev's melodies are so
scintillating even though he didn't get much adulations as S.D.Burman and
Shankar Jaikishan did in their time.

crazyoldsongs on Monday, March 15, 2010
this is one of my fav songs by mannadey since childhood .wondrfully
soothing and uplifter of spirits . thanks