Video of this song from youtube
Average Rating : 4.11
Total Vote(s) : 19
Please rate this song between 1 star and 5 stars (5 stars being the best). Just move your mouse on the stars above and click as per your rating. Your rating will really help us to improve our website. 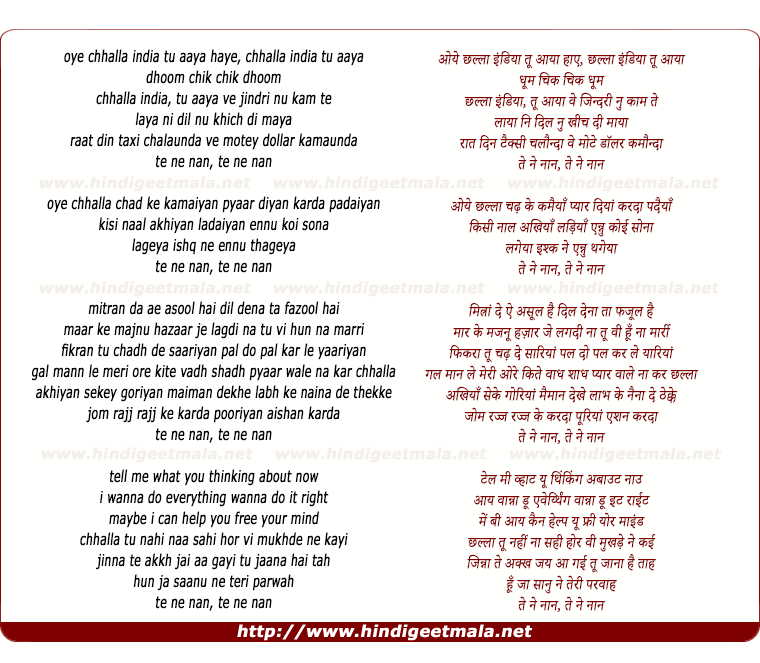 Comments on song "Challa India Tu Aaya"
gssekhon on Saturday, September 11, 2010
Everyone blaming Babbu or crook..LISTEN Chhalla is classical punjabi folk song that was sung by heaps of singers...but the time when it became famous was when Gurdass mann sang it.we can't say that it's babbal's theme. babbal rai copied this tune from gurdas man's chhalla. nd even gurdas man doesn't own this song.as I told before it's a classical punjabi folk song. and everyone is allowed to sing it.we shouldn't say that it's a copy. do u guys think babbu will sing a copied song ???????
parsc777 on Wednesday, September 22, 2010
@PathlessReality Ofcourse challa belongs only to punjab and no single
artist. However, Babbal Rai's and his friends, messing around, VOCALIZED
THE CHORUS. Any challa song released from any era, doesn't have this type
of chorus vocalization. This was something new, and bollywood jumped on it
and I DOUBT they asked anyone for permission before releasing the CROOK
challa etc. Bollywood + Babbu NOT AUTHENTIC.