Average Rating : 4.29
Total Vote(s) : 76
Please rate this song between 1 star and 5 stars (5 stars being the best). Just move your mouse on the stars above and click as per your rating. Your rating will really help us to improve our website. 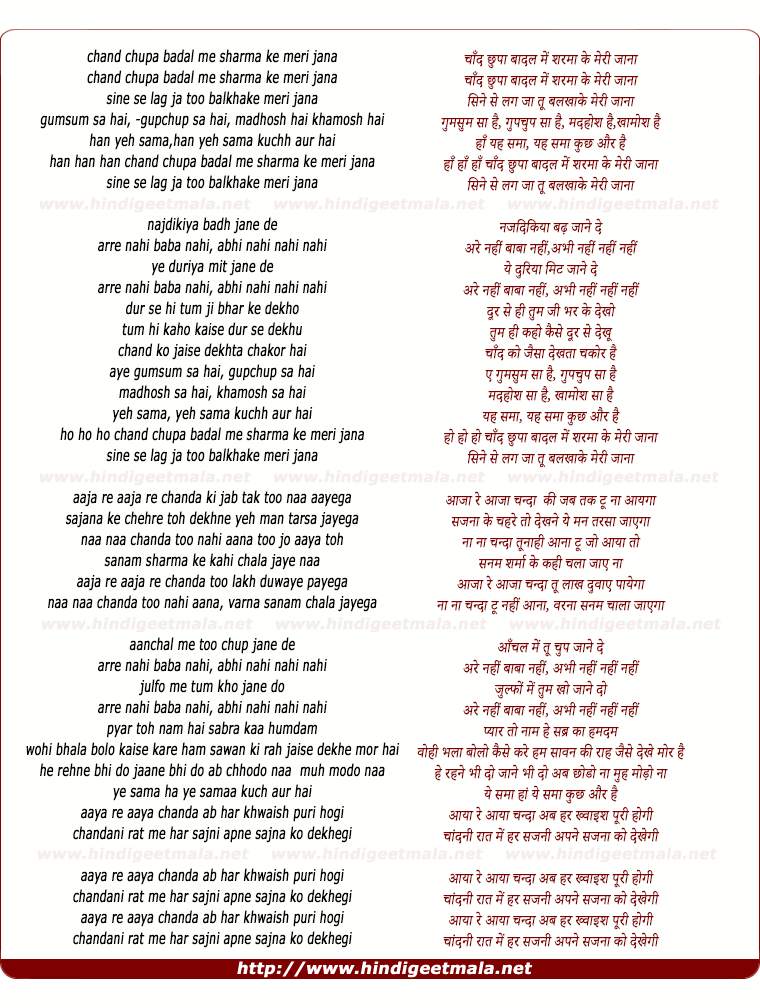 Comments on song "Chand Chupa Badal Me Sharma Ke Meree Jana"
happy life on Thursday, September 01, 2011
is ash a creation of artistic god.what kind of things does he
create..shez a fantasy vision for any artist may be..dat amount of
grace added, and feminity involved...she only becomes a queen of any
art.hmmm...bless u ash.u neednt prove ur beauty ...every decade..for
these songs r worth rememberd for ever

haco007 on Sunday, June 28, 2015
Before I watched this movie I saw the clips and was so excited because the
clips are so beautiful and Ash and Salman were very natural and had a very
good chemistry...but I didn't like the movie I know it is good that she
stayed with her husband but I wish that salman would be the husband :D﻿

thebooky161 on Thursday, December 06, 2012
I don't really find Aishwarya all that pretty normally but in this film her
and Salman make the best looking couple I've seen on an Indian screen. They
just look so good together! They're far from my favourite on screen pair
but they sure made this movie beautiful :)

hatah4 on Monday, December 20, 2010
back then she wasent faked up like now her attitude, accent, looks everything is plastic then salman khan got the freshed aishwariya rai if u like but abishek bachan is getting and old, flop, fake used aishwariya rai so its salmans gain he can get anyone
Salma96 on Sunday, September 16, 2012
We don't really knw what happened to ash and salman (besides the interviews
they had), you cant really trust the media..and u can't really take one
sided stories -.- but whatever it is, i miss them being together </3 :(