Video of this song from youtube
Average Rating : 4.06
Total Vote(s) : 109
Please rate this song between 1 star and 5 stars (5 stars being the best). Just move your mouse on the stars above and click as per your rating. Your rating will really help us to improve our website. 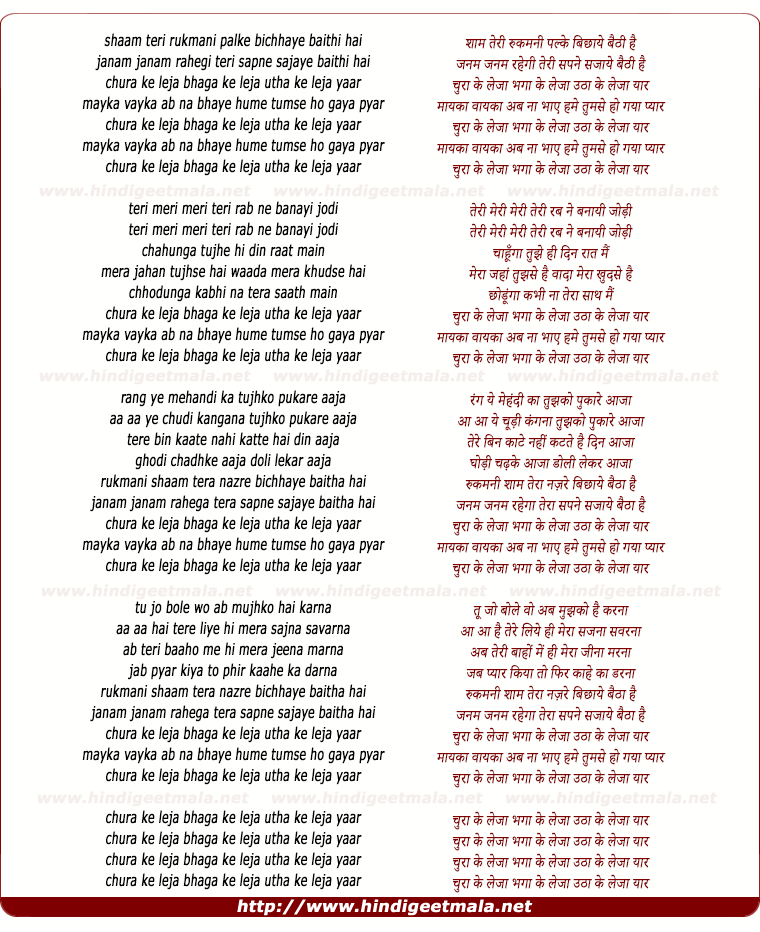 Comments on song "Chura Ke Leja Bhaga Ke Leja"
Minahli x on Wednesday, October 21, 2015
At first I was like "Who's that old guy dancing there? is that supposed to
be her dad?" And then she started dancing with him and the lyrics were more
romantic and I realized he's supposed to be the hero. *vomits*. This is
really disgusting. He looks like a grandpa and she still looks reeeeeally
young. I mean its gross enough seeing older actors (like SRK, SK, etc)
dancing with very young girls. But seeing Sanjay Dutt dancing with her is
probably the worst old-actor/young-actress situation EVER. He's gotten
sooooooo old. We cant even say that he looks young for his age. EWWW.﻿

Rajiv Paul on Tuesday, June 11, 2013
the hand grenades were hidden in your arse?lol he got convicted for
possessing an illegal gun by the supreme court which he had got for the
safety..of his family...did he parcel the other 2 guns to you?.so dont
shoot your mouth by just watching some aggrandized news channel..

desigirl567 on Saturday, June 08, 2013
okay this is getting ridiculous. sanjay dutt there are millions of
actresses out there closer to your age. Ugh he creeps me out so much.

Ritu Agarwal on Friday, June 07, 2013
were you a part of the atrocious attack to say that ...or are you daft
enough to actually comment ..which school did you go to...