Video of this song from youtube
Average Rating : 4.48
Total Vote(s) : 65
Please rate this song between 1 star and 5 stars (5 stars being the best). Just move your mouse on the stars above and click as per your rating. Your rating will really help us to improve our website. 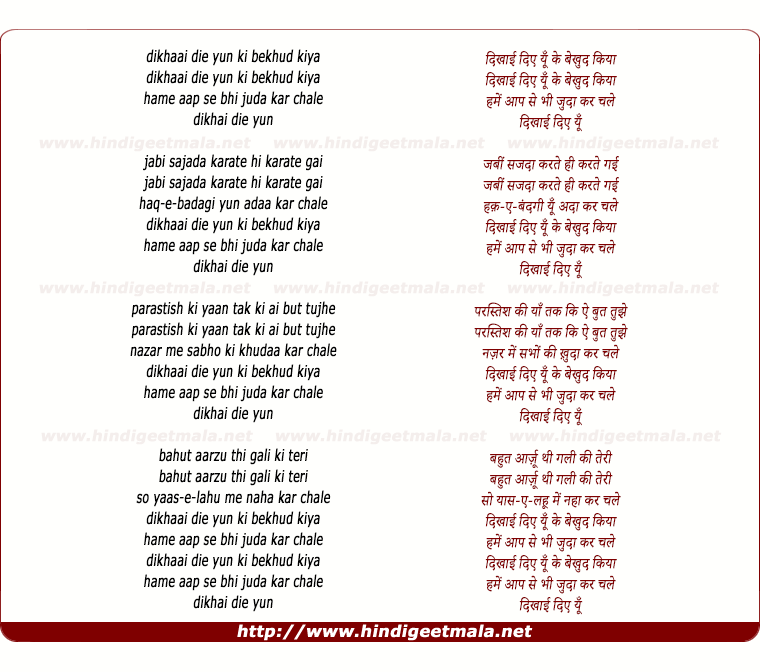 Meaning:
"I also worshiped you, o my beloved to an extent
where you became a god and i come in the eyes of everybody" (society)
*because idol(boot) worship is a sin in Islam
-boot is used for both; god and beloved. It is beloved here. ﻿

Hari Kaimal on Tuesday, September 15, 2015
Mir Taqi Mir suffered the loss of his beloved wife...and then he wrote
this. It's the best-ever love song written anywhere. And this sort of
nuanced, formal delivery, that's the special provenance of (Urdu) Ghazal. I
don't speak Urdu, but surely it's a superlative musical language.﻿

utubelondon on Sunday, October 28, 2012
She is not Ratna Pathak Shah ( who is Naseeruddin Shah's wife), she is
Supriya Pathak Kapoor (Pankaj Kapoor's wife and Shahid Kapoor's step
mother). Supriya and Ratna are both daughters of famous actress Late Dina
Pathak. :)