Video of this song from youtube
Average Rating : 4.45
Total Vote(s) : 705
Please rate this song between 1 star and 5 stars (5 stars being the best). Just move your mouse on the stars above and click as per your rating. Your rating will really help us to improve our website. 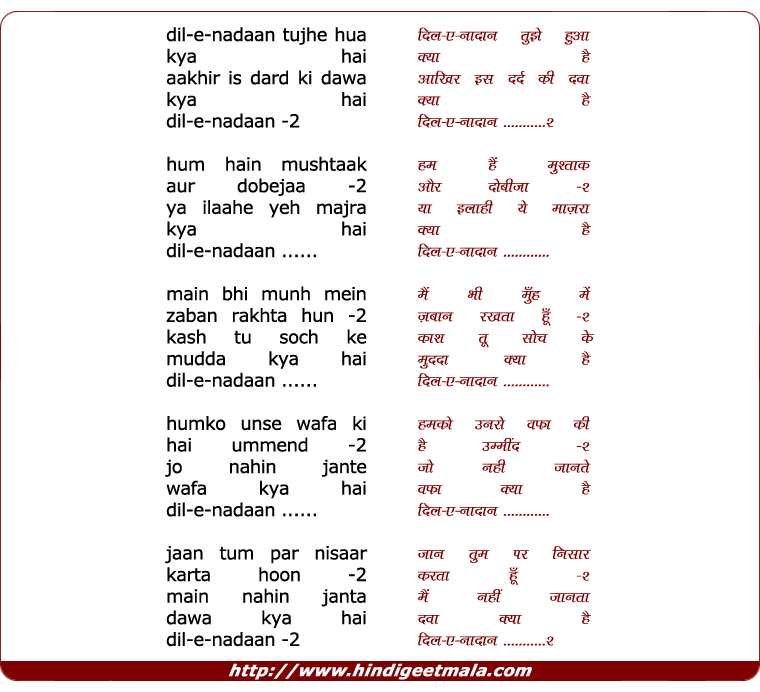 Sameer691000 on Thursday, December 29, 2011
I do not know much about Ghulam Mohd nor his works until I read this. Only
thing that is worth admiring is his music he gave for movie like Mirza
Ghalib etc. No doubt the songs of Mirza Ghalib will remain unforgettable
and eternal for the rest of the world. Thanks @mastkaladr for this write-up
and upload.

aramuskguy on Tuesday, February 21, 2012
Lovely melody..What a soothingly beautiful voice Suraiya had! It sounds
absolutely flawless,silky and smooth...It was so unfortunate that once her
career as an actress ended, her singing also came to an end. Mirza Ghalib
was the movie that brought out﻿ the best in her as a singer...

Shalin Bhatt on Tuesday, April 10, 2012
As great as the songs in this film are, I feel the following filmi songs
are of better standard (though many will disagree). Dil-e-naadaan tujhe hua
kya hai from Hunterwali Ki Beti (1943), by Khan Mastana Nukta cheen hai
gham-e-dil from Yahudi Ki Ladki (1933), by Saigal

Mani Menon on Friday, July 19, 2013
Suraiya's character was such an endearing one. And as memorable as Bharat
Bhooshan's Ghalib. Magar afsos ki baat ye hai ki asliyat me there was no
such character as portrayed by Suraiya. Khair, koi baat nahi. isi bahane,
Suraiya ke gaane sunne ka naseeb to mila hume!