Video of this song from youtube
Average Rating : 4.19
Total Vote(s) : 277
Please rate this song between 1 star and 5 stars (5 stars being the best). Just move your mouse on the stars above and click as per your rating. Your rating will really help us to improve our website. 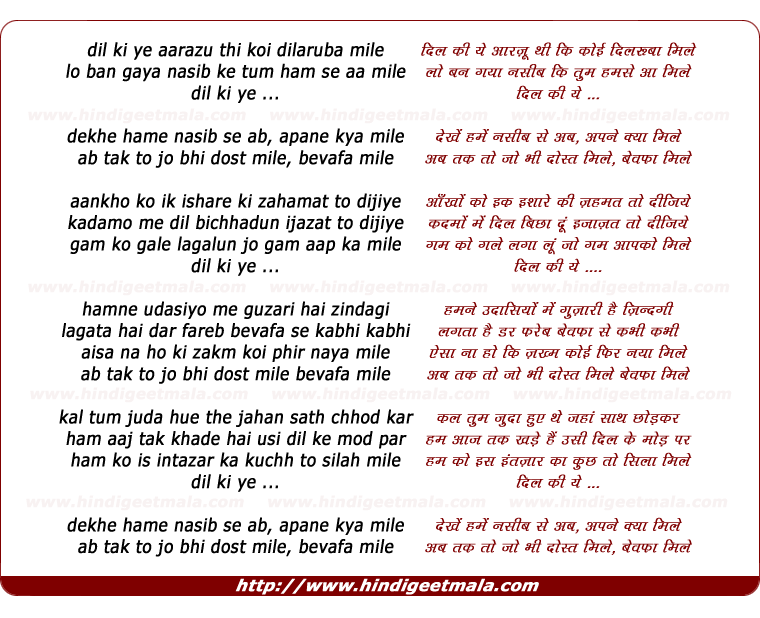 Comments on song "Dil Ki Ye Aarazu Thi Koi Dilarubaa Mile"
woobmob on Friday, July 11, 2008
Your words are rather harsh,u shud not judge anyone by pure gossip.These
men were not forced by Salma,they were unfaithful & weak men who fell for
her beauty & grace willingly & left their wives themselves.They were having
affairs not her as she was single.They must have had unhappy marriages to
do this. Her marriage to Mahmood was arranged btw,she was 16yrs too
young.Get ur facts right.

Cyrus Syed on Monday, July 20, 2009
Guys songs should bring us all together. You are all fighting with each
other to achieve what?. To throw hate on each other and compete who is
better or who is not?. This is childish. Every culture and every language
has something to offer and enrich us. Be smart.

woobmob on Tuesday, July 08, 2008
Salma Agha was a hauntingly beautiful lady ever,and such a soul searching
voice ie the most beautiful woman ever in the world (my view) ~ No
surgeries. First Real green eyes goddess natural beauty in Bollywood ~
SALAM AGHA your biggest fan.

Randeep Purewall on Thursday, May 29, 2008
The film is "Nikaah" and there are several songs which are you after: "Dil
Ke Armaan Mein Aansoon mein Beh Gaye" is the biggest; followed by "Chupke
Chupke Raat Din," the song above "Dil Ki Aarzoo" and "Faza Bhi Hai Jawaan"