Average Rating : 4.67
Total Vote(s) : 3
Please rate this song between 1 star and 5 stars (5 stars being the best). Just move your mouse on the stars above and click as per your rating. Your rating will really help us to improve our website. 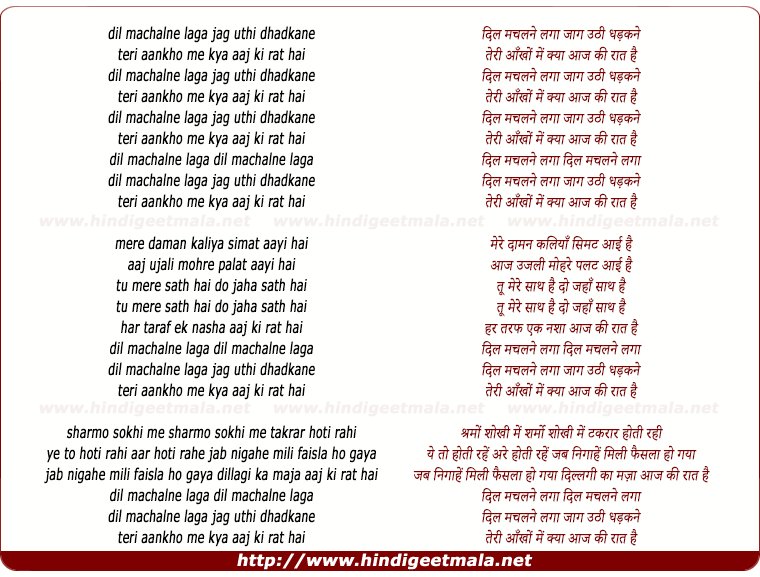 Comments on song "Dil Machalne Laga Jaag Uthi Dhadkane"
1arshiakhan on Saturday, March 26, 2011
Great upload my dear! Its simply nothing else but an pure rare gem! Loved
it! Its simply out of the world. I've never imagined that i could ever
watch the song from this very rare film! The dancing is very lovely, Asha
Tai's sweet voice makes this sounds so much beautiful and of course last
but not the least awesome music by Husnlal Bhagatram. Its really a gem! One
little thing is that i guess the dancer is Ramola, she's looking very much
like Nalini Jaywant here. Thanks for sharing this gem.

Kay Cee on Saturday, March 26, 2011
@ I suspected it, just on a hunch, but you backed it up with more relevant
input. Actually, I liked Nalini's dance moves and the song: copying or not,
that probably would have something she was asked to. But whatever, the
point I really wanted to make was that early stance in movies just after
Independence got shifted, perhaps for the worse ! Today, Bollywood movies
are so much world apart from what we get from the rest of the world. Being
different isn't bad but it has to be relevant too!

1arshiakhan on Sunday, March 27, 2011
Yeah i even suspected. But i was confuse as there was another film called
Premi Ganguram in which a dance song called ''Mera Naam Banto Jatti'' sung
by Asha Tai, Rafi Saab, Minoo Purshottam and Manna Dey originally from
movie Sazaa (1972) was taken. That's what i was confuse and thought may be
the same happened here as well. Anyways thanks a lot dear Sir for the kind
correction. But always an pleasure to see Nalini Jaywant dancing sweetly :)
Regards, Arshia

Kay Cee on Saturday, March 26, 2011
What a delectable melody! Asha's singing must have captured attention quite
early on...also remarkable is the style of dance form in earlier Indian
movies..more western in looks. Perhaps lingering British influence after
independence. Thanks for sharing.