Video of this song from youtube
Average Rating : 4.33
Total Vote(s) : 58
Please rate this song between 1 star and 5 stars (5 stars being the best). Just move your mouse on the stars above and click as per your rating. Your rating will really help us to improve our website. 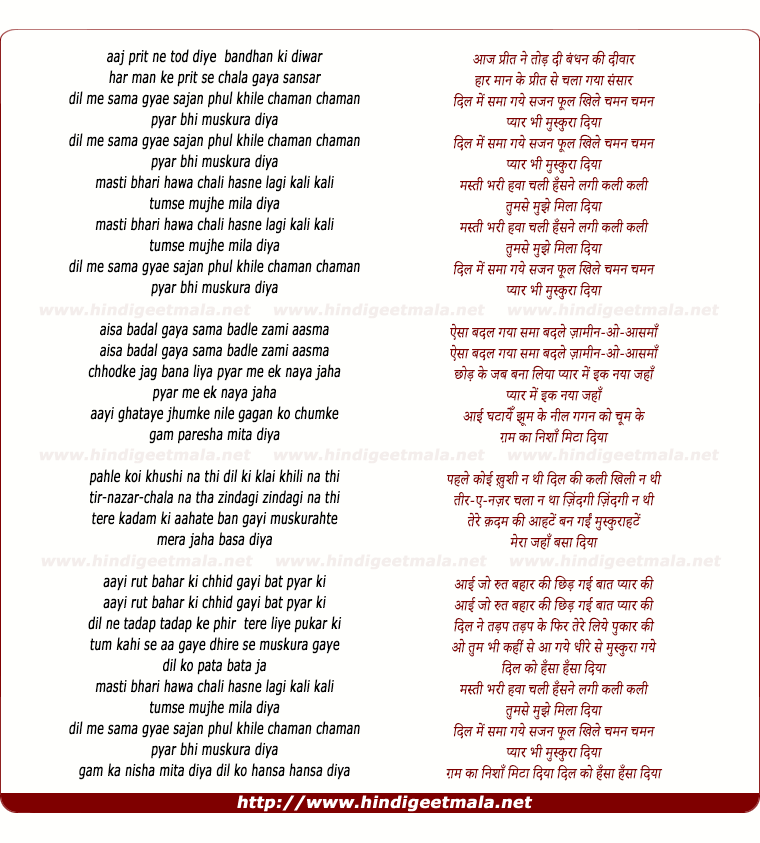 Comments on song "Dil Me Sama Gaye Sajan"
RituPM :) FEELThePurityPeace&DepthINMusicINYourShr on Saturday, February 13, 2010
What a sweet romantic song! :) Sung so sweetly by Lataji & by Talatji in
his inimitable dreamy voice! Having an affinity to open nature prairies
amid the wilderness LOVE the picnicky locations its picturized in! I was
just waiting for them to lay down the yummy spread! :) Cute couple they
surely make, Madhubala & Dilip Kumar in his youth. :) I wonder how many
such vintage music Gems ARE there? I keep getting pleasantly surprised at
the seemingly endless treats on YouTube! Thanks! :)13 Feb, 2010.

nandu1f on Saturday, June 15, 2013
This song is the best romantic duet of the pairs, both the singers as well
as actors. Filmed with the verdant background, Dilip has displayed his best
subdued romantic acting & with Madhubala's love-lorne manners it truly
makes the sequence unforgetable. I cannot tire of watching the combined
magic of the melody and the romance. Two other comparable romance sequences
come close - Dilip-Meena in Yahudi (in the garden) & Sunil Dutt-Nutan in
Sujata (O Majhi). Thanks Abdul ji- good print.

Azeez Ahmad on Sunday, March 04, 2012
Sheer bliss. Never seen such a care free romantic scene on/off the screen
(and perhaps never will). Two extremely good looking young lovers seem to
be totally unaware of the camera. No vulgarity (as late Shammi Kapoor used
to applaud). Entertainment for one and all. Many thanks for reviving
precious memories

Priya MyMusicalHeaven on Saturday, September 21, 2013
What a melodious creation by Sajaad Hussain ! Of course, Lataji's and Talat
Mahmood's voices cast their spell on me, and their renditions are excellent
as always. Rajinder Krishan's lyrics are sweet. On-screen, MB and DK have
great chemistry. Don't tire of listening to this one easily. Thanks for
this duet.

Harjap Aujla on Tuesday, June 18, 2013
A romantic masterpiece. It is a great tribute to the professionalism of
music director Sajjad Hussain, who never cared about the tastes of the
producers, but created unforgettable music compositions. Both Talat Mahmood
and Lata Mangeshkar did their best to make this song immortal.