Video of this song from youtube
Average Rating : 3.93
Total Vote(s) : 42
Please rate this song between 1 star and 5 stars (5 stars being the best). Just move your mouse on the stars above and click as per your rating. Your rating will really help us to improve our website. 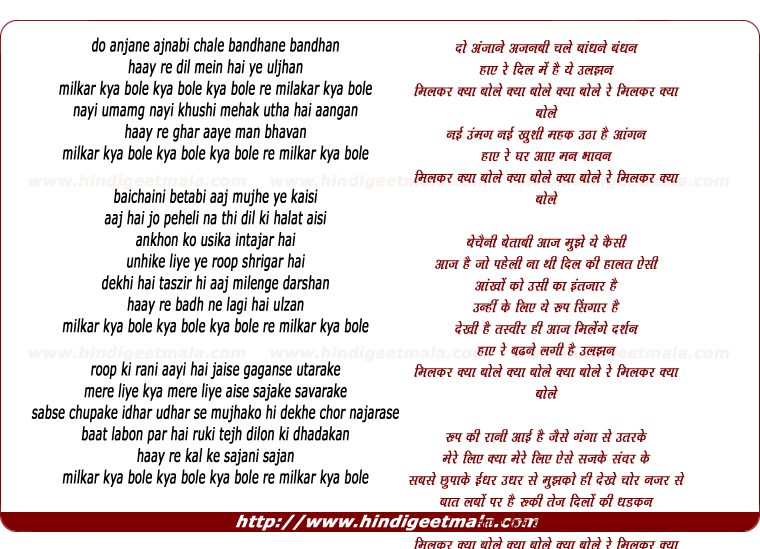 Comments on song "Do Anjaane Ajnabi Chale Bandhne Bandhan"
angelife786 on Thursday, May 28, 2009
i don't reallly care wteva he does off screen but on screen i love him to
bits especiallllly with amrita they look the best him and kareena looked no
one near even good , and also shahid is a brilliant actor as welll a
fantastic dancer everithing is jus so excelllent about him i don't think he
needs to sleeep wiv some 2 be in a film

Akshay Iyer on Friday, March 09, 2012
It is a pity that we don't even such songs and movies nowadays. The music
by Ravindra Jain remains traditional at heart even though it tries to
project a modern outlook through Prem. The male singer is Udit Narayan
while the lead female singer is Shreya Ghoshal, one of the most popular
new-age playback singers.

bwfan87 on Thursday, March 04, 2010
Hey to all the Shahrita fans, if u wanna see them back together I think u should get a twitter account n message to Shahrita or Karan Johar tell them how much u love Shahrita together n miss them n u wanna see them back onscreen. Let our voices be reach to them n hopefully our wish come true.
joshika572 on Sunday, March 14, 2010
omg this song is soo cute! and it really shows the beauty of marraige u
kno? like its hard to explain but i mean like when you're getting married
you are the other partners. i hope that made sense lol, i tried =P ha and
shahid is soo cute in the end ha he drops the vase =P lol so cute! =)

Atif Aslam the Voice of my Heart on Friday, September 07, 2012
I Agree wid u !! b4 we were abl 2 watch bollywood films wid
parents..relatives. bt now !! its impssble 2 watch sm bollywood movies
with parents..relatives like...dad,uncle...big bro..bcz of thr songs n
scences . which r too much open n dirty !!!