Video of this song from youtube
Average Rating : 4.50
Total Vote(s) : 34
Please rate this song between 1 star and 5 stars (5 stars being the best). Just move your mouse on the stars above and click as per your rating. Your rating will really help us to improve our website. 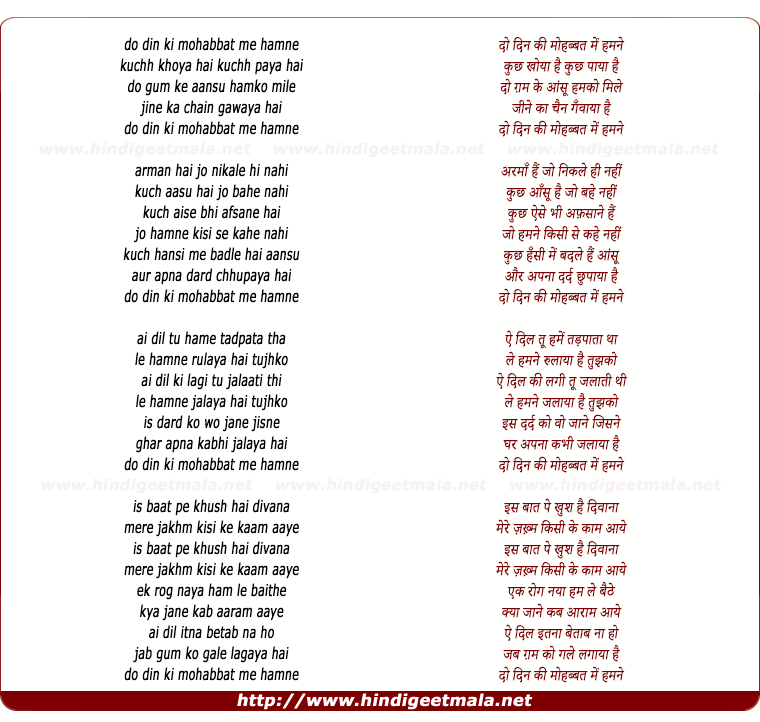 Comments on song "Do Din Ki Mohabbat Me Humne"
RealMusicKing on Sunday, December 11, 2011
You are right. Talat Mahmood was Madan Mohan's favorite male singer. They met in Lucknow in 1946 and remained friends till the end. Regards.
Valparaiso436 on Wednesday, December 15, 2010
Dear Friend, Thanks your previous.I am a great fan of Talaji too.His songs
reflect the philosophy of life (Most of our lives our spent undergoing
suffering, sadness and the pain associated thereof. If you don't live in
the real world then it's like living in a fantasy (virtual real world)
which is expensive fantasy.Talatji's songs coupled with his golden voice
(with a tinge with sadness) make up of everything. Thanks for your mail.

Sharad Bailur on Monday, October 26, 2015
An unsung song of Madan Mohan handled so ably by Talat Mahmood. Easily one
of his most difficult songs on par with Madan Mohan's Hum Se Aaya Na Gaya.
Sounds simple. Try singing it. If you are honest to the tune (and to
Talat's treatment of it), AND MAKE THAT REALLY HONEST EFFORT, I promise
you, you will fail. It is that difficult.﻿