Video of this song from youtube
Average Rating : 4.55
Total Vote(s) : 31
Please rate this song between 1 star and 5 stars (5 stars being the best). Just move your mouse on the stars above and click as per your rating. Your rating will really help us to improve our website. 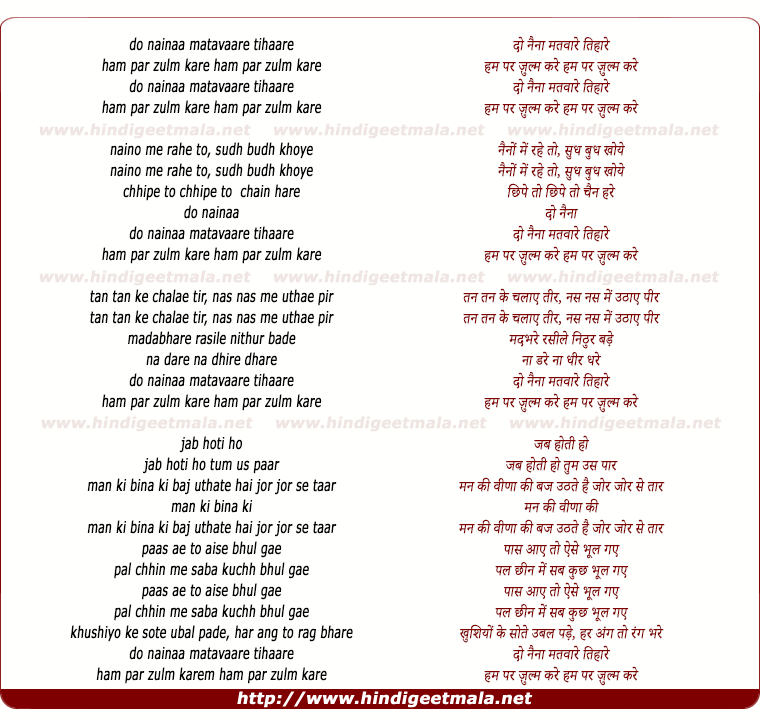 Comments on song "Do Nainaa Matavaare Tihaare, Ham Par Zulm Kare"
Voltairec on Tuesday, May 18, 2010
As many posters have already said, I listened to this song when my dad
religiously tuned into Ceylon and provided the context on why KL is great.
Listening on Philips radio was magical and we have to be very attentive to
catch all lyrics since there was no tape recorder or repeats. Even If we
reduce music to it's most fundamental aspect 'sound' KL still hovers head
and shoulders above! Thanks dad.

MsSVasan on Tuesday, September 02, 2008
aptkp: /:D /;D LOL !! Your comment is so appropriate & funny too. I really
agree with you. I was looking 4 the song "Mein Kyaa Janoon Kyaaa Jadoo Hai"
and stumbled onto this favorite golden classic. Thx 4 uploading
Musique4Ever. Great Evergreen classic