Video of this song from youtube
Average Rating : 4.41
Total Vote(s) : 164
Please rate this song between 1 star and 5 stars (5 stars being the best). Just move your mouse on the stars above and click as per your rating. Your rating will really help us to improve our website. 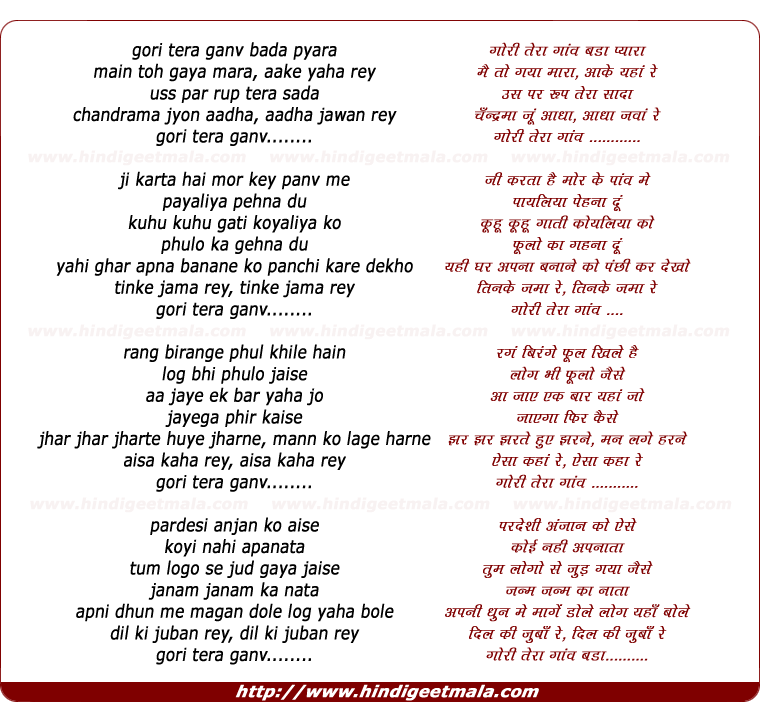 Comments on song "Goree Teraa Ganv Bada Pyara"
AppaRao Venkata Vinjamuri on Thursday, August 20, 2015
AROMA of village life is been depicted in this COMPOSITION of the BLIND MAN
by birth Can u believe that a person who has not seen this world and its
colours and even than he is able to do that work (compositions and poet
)which a common person cannot do so if u will praise RAVENDRA JAIN wordz
will shortened and will not do JUSTICE
Our Jesudas Sir has done full justice... an un for gotable song.
goree teraa ganv bada pyara, main toh gaya mara, (aake yaha rey -2)
uss par rup teraa sada, chandrama jyon aadha, (aadha jawan rey -2)
goree teraa ganv

Sivaram Pochiraju on Wednesday, October 29, 2008
I gave my two Hindi Film Casettes of YESUDAS to Mr.Sudhakar Chapke for
getting recorded in his Tape Recorder which he did Painstakingly and loved
to listen to the GEMS . This was way back in the Eighties when we were
working at Tarapur for M.S.E.B . Tarapur was very calm and peaceful then .
The situation is changed completely now . I do not know where he is right
now . I hope he will listen to this Great song in YOU TUBE and will
communicate with me some day .

Crystal Dream on Friday, October 01, 2010
10. Now there are folks who argue about M.Rafi being equal or better than
Dr. K. J. Yesudas ... Thankfully we get to hear very little equating as
regards Kishor Kumar. Fact of the matter is these are all emotional
outbursts n nothing else. Remember, he went out of his language n won TWO
national awards in those languages, esp on in Hindi while both Rafi n
Kishor were at their singing best . Now, u dont compare others with such
stuff ...!