Video of this song from youtube
Average Rating : 4.35
Total Vote(s) : 289
Please rate this song between 1 star and 5 stars (5 stars being the best). Just move your mouse on the stars above and click as per your rating. Your rating will really help us to improve our website. 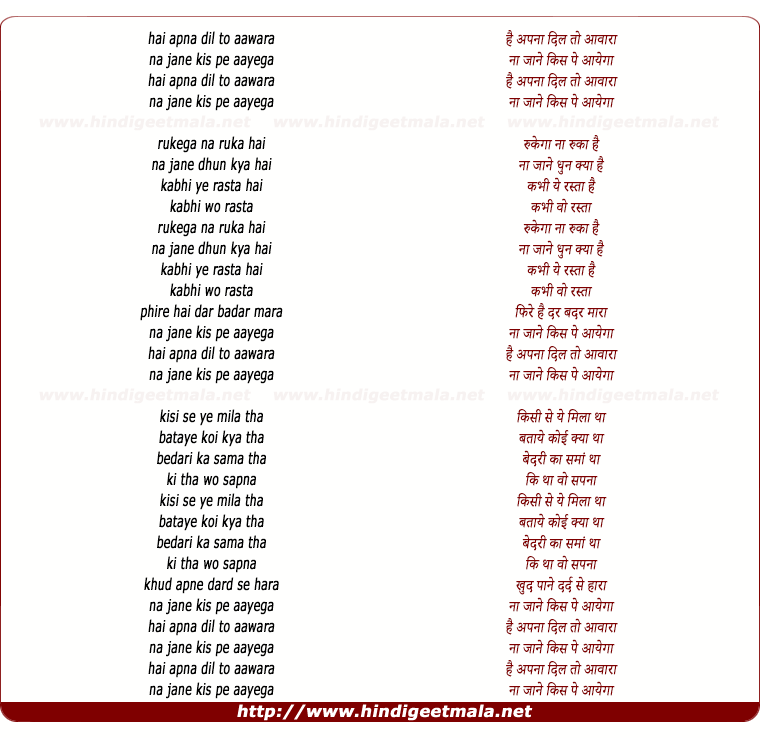 Comments on song "Hai Apna Dil To Aawara (Sad Version)"
rumahale on Sunday, August 15, 2010
One is familiar with other version accompanied by mouth organ play. This
sad version is equally good - especially more significant is the rich
lyrics by Majrooh Sultanpuri. S D Burman and Hemant Kumar have excelled in
their field. It has sequence that is played with all maturity by Dev Anand
with Waheeda Rehman in the backdrop also playing well. There is need to
preserve these old gems.Thanks for reviving memories of old golden era.

M V Krishnan Krishnan on Monday, August 09, 2010
Beautiful song! Hemantda was one of the most versatile artists of HFM. I
distinctly remember this evergreen song being played in Binaca Geetmala and
never climbing to the top of the hit parade. But it surprised all of us
being the number one song of the year in its annual program! Thanks for
this excellent video! M V Krishnan

NatsKr75 on Monday, March 14, 2011
one of my all-time favorites. not that it reflects my philosophy in any way
..just like the song

premacharitra65 on Tuesday, March 13, 2012
why is this song so captivating and melancholy drags into the same
situation they are in !!