Video of this song from youtube
Average Rating : 4.09
Total Vote(s) : 100
Please rate this song between 1 star and 5 stars (5 stars being the best). Just move your mouse on the stars above and click as per your rating. Your rating will really help us to improve our website. 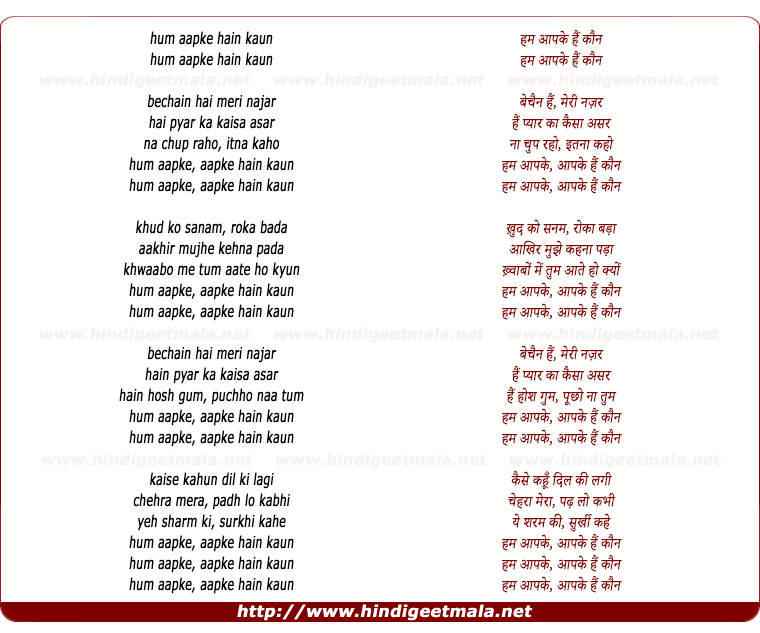 Comments on song "Ham Aapke Hain Kaun"
kote2005 on Monday, September 21, 2009
That applies for all the films. A film is actually a directors media and he
controls the film. In any film it is the entire unit that work for the
success of it. But for the viewers, among the actors Madhuri was the sole
attraction of the film when it was released and she received the enormous
acclaim for it. The viewers reaction, the press, critics everyone talked
about her more than anyone else. It is a historical fact. Be it her
expressions dictions, her costumes everything became a style.

deo.bhushan Tiwari on Wednesday, August 05, 2009
Some of the people who dont have any idea abt legendary SPB or have less
idea, for them I wud put 2 informations. 1. SPB is the world record holder
of singing the maximum no. of songs and beside singing and music
directions, he is an actor, director and producer. 2. SPB has lended his
silken voice to Kamal Hasan in his hindi and south indian movies before
lending his voice to Sallu Bhai. No voice has suited more to salman than
SPB. I just Love SPB like nethng.. Thanks for reading.

Preyas Chinchure on Thursday, June 03, 2010
I just noticed...the credits show Madhuri's name before that of Salman.
Madhuri was the first and only female superstar of Bollywood, whose films
didn't need hero to succeed. The main attraction of the movie was always
Madhuri, even if she was against Salman, Amir, Shahrukh, Anil or
Sanjay..people used to say its a Madhuri's movie. Can any actress today
claim it??? I love her.

bongofight on Sunday, September 11, 2011
@shamsmi salman is cute here but it was madhuri for whom this film became
such a huge hit at that time salman was not as big star as he is today.
Madhuri got all the credit for the film, old yougn men women all were mad
about her. she won multiple awards filmfare screen etc. you should check
magazines of those days to see how big madhuri was then, she was bigger
than her heroes.