Video of this song from youtube
Average Rating : 4.47
Total Vote(s) : 355
Please rate this song between 1 star and 5 stars (5 stars being the best). Just move your mouse on the stars above and click as per your rating. Your rating will really help us to improve our website. 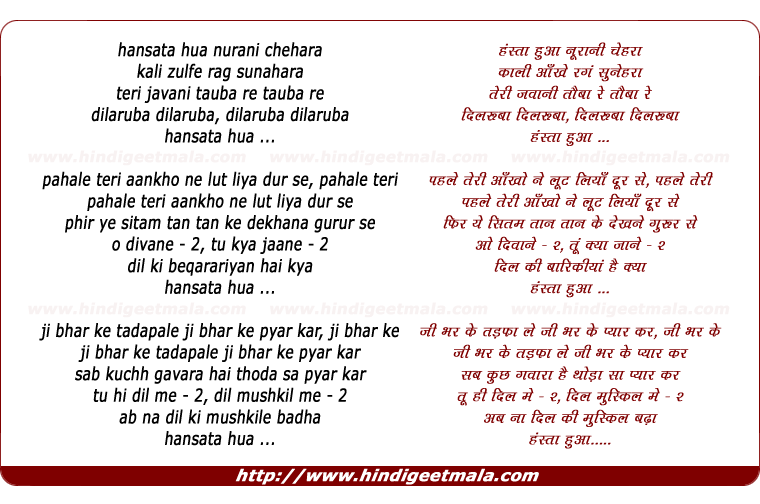 Comments on song "Hansta Hua Nurani Chehra, Kali Zulfe Rang Sunhera"
Zil Hasnain Kazmi on Thursday, February 03, 2011
It is a fantastic song. One of my favourites, what we remember from
childhood we remember for ever- what a luck Laxmi Kant Pyare Lal had. First
film and such a great success, it is amazing. I must give credits to this
pair who proved to be the best in seventies. They are the only one in
Bollywood who can proclaim 450 films. What a privilege to hear music like
this. First duet by Lata Mangeshkar & Kamal Barot. Laxmi ji is no longer
alive but his creations will remain alive.(4rth February 2011)

TUFAIL HEERA on Friday, September 05, 2014
The song is holding thrilling and exciting tempo, heart beating faster in
double time. The charming dancers have stepped in stage with outstanding
music. These Artists have performed all the delicate, graceful movements. I
was looking for this excellent song since long time. Thank you very much
wonderful and unique upload.﻿

Chidanand M on Tuesday, June 23, 2009
You have mentioned "it was LP's first movie" Therefore, I made a comment.
However, I also mentioned the first movie wrongly. The first movie of LP
was actually "Sati Savitri" Even this movie had very nice music. But the
first superhit was Parasmani, which will remain evergreen in our minds and
hearts.