Video of this song from youtube
Average Rating : 4.51
Total Vote(s) : 61
Please rate this song between 1 star and 5 stars (5 stars being the best). Just move your mouse on the stars above and click as per your rating. Your rating will really help us to improve our website. 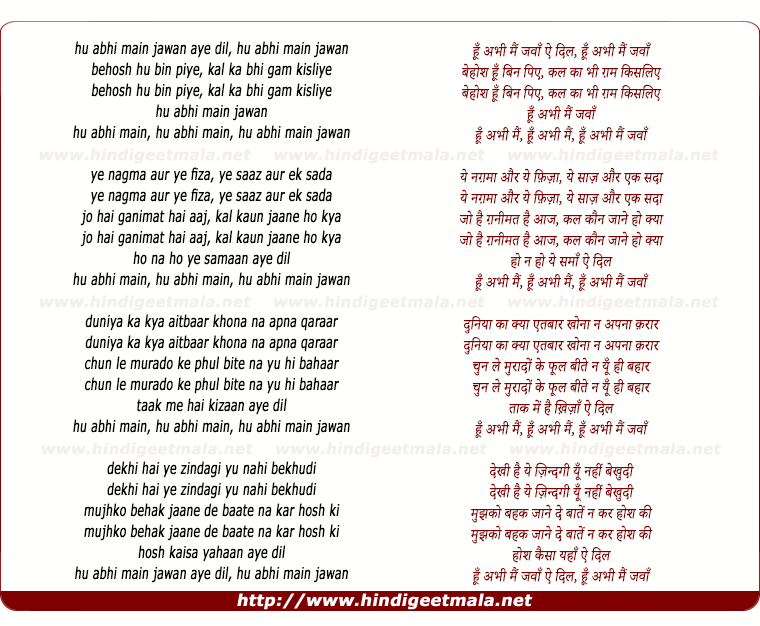 Comments on song "Hu Abhi Main Jawan"
Dilip S. Coulagi on Wednesday, June 23, 2010
Thanks for posting. A couple of comments about translations: I doubt Aar
Paar means this and that. It should mean through and through, no? I may be
wrong. However, 'tak mein hai khiza' definitely does not mean 'it waits for
you' . It means ' autumn is waiting'; this is not the colourful autumn of
the west - this is the autumn of north India, when trees lose all leaves
looking bare, and thus in Urdu poetry Khiza stands for ruination, all
looking bare.sad. Remember OPN's song: DeewanaHuaBadal.

Dilip S. Coulagi on Wednesday, June 23, 2010
In the last antara, the words are 'barson se khiza ka mausam tha, veeran
badi duniya thi meri, hathon mein tera aanchal aaya ke bahar aayi'. It
illustrates the meaning of khiza. Once again, thanks for posting. BTW in
the audio version, the first antara is missing as it used to be in so many
songs of that time, when the song for the audio version had to fit one side
of a 78 rpm record.

Dilip S. Coulagi on Wednesday, December 07, 2011
Thanks for posting the song from the movie. As was common in those days,
the audio version released was shortened by omitting the first antara
(stanza).The song is still available as the shortened audio version so it's
a pleasure to listen to the full version.

nandu1f on Thursday, October 28, 2010
Shakila brings out the turmoil in the dancing girl's heart so well. For
some reason she did not get the recognition of her talents. You can watch
this song many times, without getting tired of it, thanks to OPN. And
thanks to you Yuan, once again.

Pastor Jarnail S. on Wednesday, February 03, 2010
Geeta was really a singing queen of the fifties. Her so many songs are
always fresh when heard and this one is the best example. She is still
"Jawan" through her unforgettable lovely songs. songs. May peace be upon
her.