Video of this song from youtube
Average Rating : 4.50
Total Vote(s) : 422
Please rate this song between 1 star and 5 stars (5 stars being the best). Just move your mouse on the stars above and click as per your rating. Your rating will really help us to improve our website. 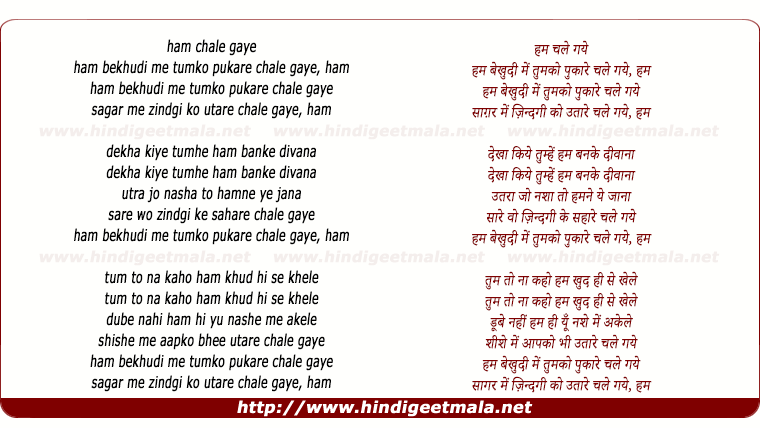 Comments on song "Hum Bekhudi Mein Tumko Pukare Chale Gaye"
sambhorvijay on Monday, April 12, 2010
something happens whenever this song begins and then the magic in words, composition and singing keeps mounting and engulfs you when it ends leaving you asking for more.Such is the magic in creations of those immortal song writers, incomparable composers and singers with deathless voices.This song serves to illustrate as to why the law of dimishing utility had rated music as an exception to the rule. Why does Oscar not reach these gems?
iseeking on Friday, September 17, 2010
@mvashi56

Devanand is not known for acting out such a song, but I still can't fathom this gem of a song, full of pathos, pain, and a host of other emotions, being picturized on Mukri. MUKRI, the comedian? Just plain incredible.

iseeking on Saturday, December 26, 2009
Composers of today can learn from listening to this song, how good music can be made purely on the strength of the lyrics, tune and a good voice. Without drowning the words in the cacophony of loud instruments.
mvashi56 on Friday, September 17, 2010
@iseeking
the song was written by Majrooh Sultanpuri.
I think what rbgupta meant that the song was supposed to be picturised on Mukri and it was decided to picturised on Dev Anand.

amitbhardwaj24 on Monday, August 30, 2010
Looks like he put the voice of his soul in the song ... this song is heart touching ... and one of the most popular song ... thanks for posting this song here ...
View all 43 comments related to song Hum Bekhudi Mein Tumko Pukare Chale Gaye
Popular Links on HindiGeetMala