Video of this song from youtube
Average Rating : 4.65
Total Vote(s) : 52
Please rate this song between 1 star and 5 stars (5 stars being the best). Just move your mouse on the stars above and click as per your rating. Your rating will really help us to improve our website. 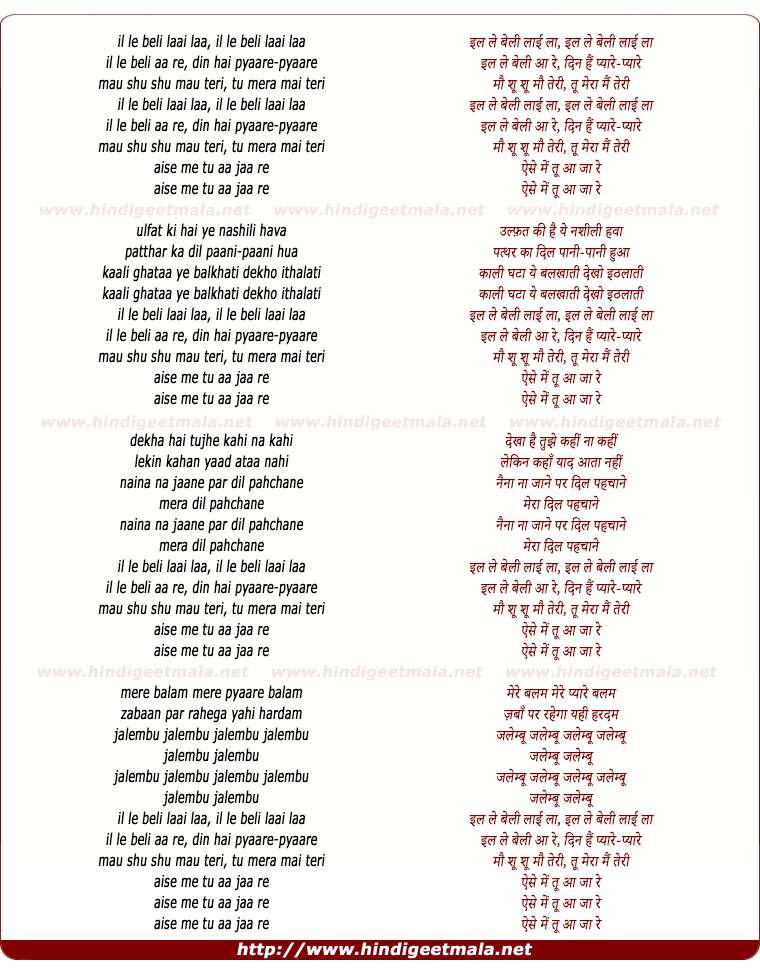 Comments on song "Din Hain Pyaare Pyaare"
Priya MyMusicalHeaven on Sunday, December 15, 2013
What a delightful song ! Very cute and sweet ! Wah, wah to S-J for such
lovely melodies; the music, especially in the beginning, has similarity
with "Gore gore, o banke chhore" ; both songs seem to have been inspired by
Edmundo Ros's "Chico Chico Puerto Rico". Regardless, several of S-J's
compositions from the '50s are so sweet, melodious, and exhilarating. And
Lataji invariably puts me in her thrall.with such freshness in her
utterly sweet voice, one can listen to her songs all day, and still not get
tired of listening to them. Thanks, Ajay.﻿

Coucoutchicou on Friday, May 06, 2011
From what I remember, apparently in the film Beena Rai is supposed to have
returned from France and so uses - what is supposed to be French words in
this song. So in the refrain you have: "Il est bel (?)" (He is handsome) -
"Mon choux, tu mon chéri" (My darling, you my dear). At teh end it sounds
like "Je l'aime vous" which actually makes no sense since it translates as
"I love him you" - so perhaps it is Goanese after all!

sogiji on Tuesday, November 22, 2011
Splendid ! Excellent !! Superb !!! Are there words enough to describe this beauty? Nostalgic and way down memory lane. this epitomises the beauty of the pure Indian music, unlike the almost western music that goes for indian music these days. As an African,if you will permit me, you (Indians) have left the clear path and have taken a wrong turn by wholly aping the west.
Thanks ajayuv for this beautiful upload.

haqiqat rai on Saturday, July 23, 2011
You have jogged up old memories. What a picture. Kishore Sahu sahib
introduced three new faces- Bina Rai, Asha Mathur and Indra Panchal. To the
best of my recollection, the last one was a lecturer and perhaps this is
the only picture she had appeared in. Music by Shankar Jai Kishan was
wonderful, who composed music for evergreen songs. Many thanks for putting
these in the public domain