Average Rating : 4.49
Total Vote(s) : 338
Please rate this song between 1 star and 5 stars (5 stars being the best). Just move your mouse on the stars above and click as per your rating. Your rating will really help us to improve our website. 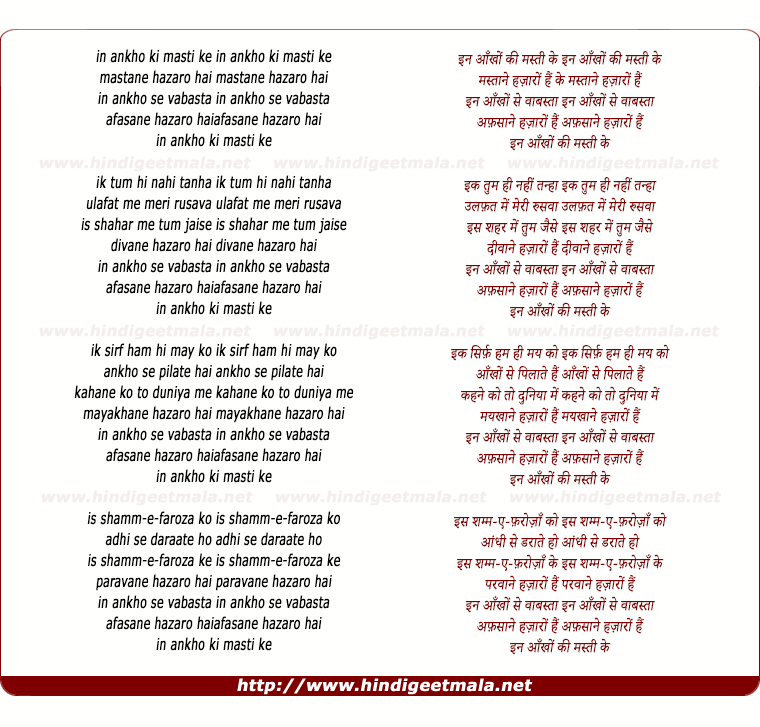 Comments on song "In Ankhon Ki Masti Ke Mastane Hazaron Hain"
PrincessRamsha999 on Sunday, January 08, 2012
Oh heavens!!! She was pure personification of elegant, womanly appeal,
feminine strength, matchless beauty with core and power, and the raw
magnetism towards men... yet NEVER what we term as "besharm"... Charming in
her own distinctive manner, evoking the sensuality in men and envy in
women, yet in no way vulgar or overt. Rekha redefines the words "ada",
"lachak" and "nakhra" in a way that is pure yet brazen, gentle yet
passionate... The one and only Umrao Jaan is Rekha. Never can she be remade!

cantankerousable on Tuesday, April 27, 2010
Its sad that they dont make it like this anymore. Khayyam's music is
hauntingly beautiful and accurately arranged. The instruments are doing
what they are supposed to do - accompany the voice of the singer and not
drown it in techno crazyness. Asha's voice melts your heart. I can't
imagine anyone else singing this song. Rekha managed to infuse such passion
in this role that you really feel like crying at the end when she returns
to her kotha and looks at herself in that full length mirror.

Alejandra Achury on Wednesday, September 19, 2012
Anyway i think that Aishwarya made an amazing job, she is perfect for that
character but never gonna overcome Rekha she is the best. i just think than
Aish look elegant and as a lady, but imagine if Priyanka have done that
role, maybe no so good (although she is a good actress too) umrao Jaan is
classic, the 2006 remake is really good and the original 1981 movie is
amazing too. NO MORE FIGHTS :)

chidimaar83 on Monday, September 05, 2011
This song was released much before I was born..but boy it rocks even today
. Can't say the same about today's songs though barring few exceptions.A
great song is marked by it's longeivity and this song passes that test in
flying colours.