Video of this song from youtube
Average Rating : 4.44
Total Vote(s) : 1173
Please rate this song between 1 star and 5 stars (5 stars being the best). Just move your mouse on the stars above and click as per your rating. Your rating will really help us to improve our website. 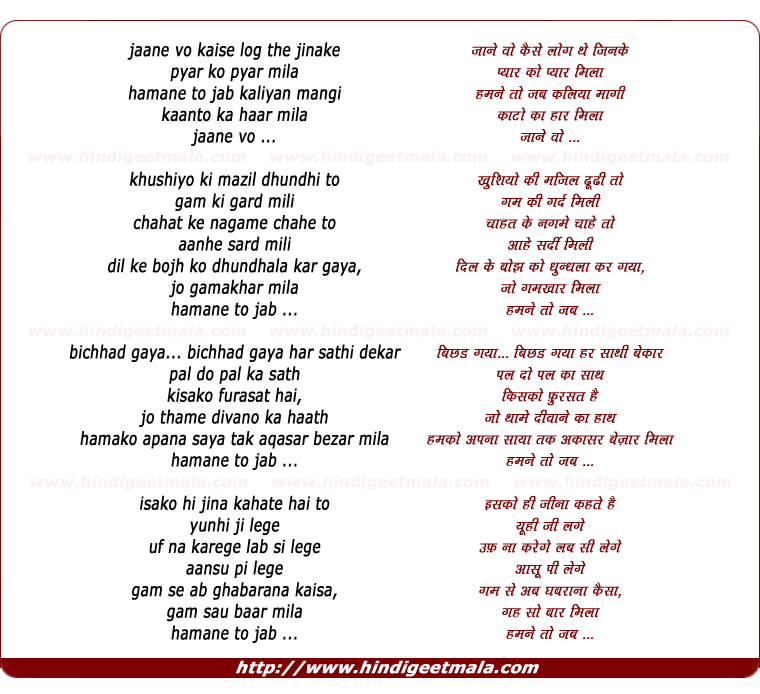 Comments on song "Jaane Vo Kaise Log The Jinake Pyaar Ko Pyaar Milaa"
ARUNAVA1459 on Sunday, September 25, 2011
grt song.extremely melodious..very truely told..the whole song contains a meaning.each and every word.wah!wah!!!!1grt way tz sung!grt composition.htz off to hement kumar mukherjee and s.d.burman.
BIGDOGKILO1 on Wednesday, May 11, 2011
One of the old time fav. Mind blowing lyrics . Hemant at its best. " humne to jab kalia mangi kanto ka har mila ."
Moti Lalwani on Wednesday, February 10, 2010
It is completely wrong to say this song was actually based on tune composed
by his son R.D Burman. Please read "Ten year with Guru Dutt - Abrar Alvi's
Journey", a biography of Guru Dutt. On Pages 71-72 of the book, it is
written how Guru Dutt wanted this song to be copied from film 'Harry Black
and the Tiger, how SDB initially resisted and finally changed and created
it in the present form, which was later even liked by the original Producer
of 'Harry Black', .

Cooolguy51 on Sunday, August 01, 2010
SD Burman+Hemant Kumar and ofcourse Gurudutt, Sheer magic. There are some
good movies and some very good movies made in bollywood. But some are a
class apart, Pyaasa being one of them. The music, story and wonderful
performances makes it a sheer joy to watch!

Moti Lalwani on Wednesday, February 10, 2010
Besides, I have with me interviews with legends who worked with both father
and son, testifying that none of the SDB tunes or songs were created by RDB
Moti Lalwani