Video of this song from youtube
Average Rating : 4.42
Total Vote(s) : 185
Please rate this song between 1 star and 5 stars (5 stars being the best). Just move your mouse on the stars above and click as per your rating. Your rating will really help us to improve our website. 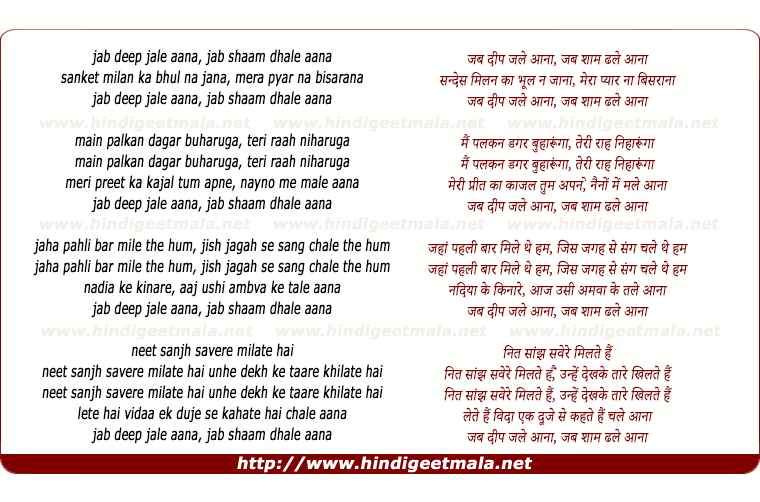 Comments on song "Jab Dip Jale Aanaa, Jab Shaam Dhale Aanaa"
Priya MyMusicalHeaven on Sunday, October 11, 2015
Indeed, one of the best songs composed by Ravindra Jain, and so beautifully
written by him as well. The Raag Yaman-Kalyan-based composition is just
outstanding. And what a wonderful rendition by Yesudas. Hemlata also
delivered it beautifully. One round of listening to this song is never
enough, such is its magic. Kudos to all the artistes.

The movie had a sweet, simple story, and was made very well -- well
directed by Basu Chatterjee who also gave us several clean, small-budget,
family-oriented films, and had artistes who did justice to their roles. The
song-picturization is natural, however, the heavenly duet is so beautiful
that even music lovers who like the songs from the late 1940s to '60s
period may be able to appreciate its beauty, provided they have an open
mind and open heart, and of course, open ears. A wonderful creation by all.
Thanks for the upload, Rajshri.﻿

Roger V on Sunday, July 22, 2012
To those who claim that Rafi or Kishore could’ve sung this as well as
Yesudas - Yes, Rafi could’ve sung this song. Yes, Kishore could’ve sung it.
And yes, I can sing it too. In the shower. The point made so eloquently by
pistachioguy is that, the classical training, voice and style of Yesudas
take this song to heights not attainable by either of the afore-mentioned
singers. That doesn’t make them any less great, it just emphasizes the
status of Yesudas among the pantheon of greatest singers.

Mohan7 on Tuesday, July 14, 2009
Yes, Yesudas has some "bad attititude", like believing in all religions,
and speaking for the unity of religions and not really emphasising the
religion in which he was born,does not sugar coat his words. If this are
bad attitudes, then it is "bad".But he is the only one with so much courage
to talk openly, especially in the film field. He survived all these years
purely because of his talent and God's grace. In his own words,
Jagadeshwarante Anugraham Kondu...Thank you for the reply.

knpradeep77 on Saturday, December 20, 2008
I feel language is not a barrier for music. Yes, you may not understand the
meaning of the words, but still you can enjoy the music. I request you to
kindly listen to the following songs to understand what I mean by
'difficult songs'. I hope You also will understand that these songs are
much more complicated, involves very high pitched& very low pitched notes,
much more classical notes, very complicated notes compared to Oduniya ke
rakhwale, or Madhuban me radhika. contd---

knpradeep77 on Thursday, December 18, 2008
You need not understand the words or the meaning. But you can simply listen
to these songs and you will understand that all of the aforementioned songs
are much difficult than O DUNIYA KE RAKHWALE. It is not only the high pitch
which decides whether a song is light or not, but the variation of the
pitch and so many other factors. I still request you to listen to those
malayalam songs to understand what I mean. Please forget the lyrics, but
concentrate on the music