Video of this song from youtube
Average Rating : 4.81
Total Vote(s) : 53
Please rate this song between 1 star and 5 stars (5 stars being the best). Just move your mouse on the stars above and click as per your rating. Your rating will really help us to improve our website. 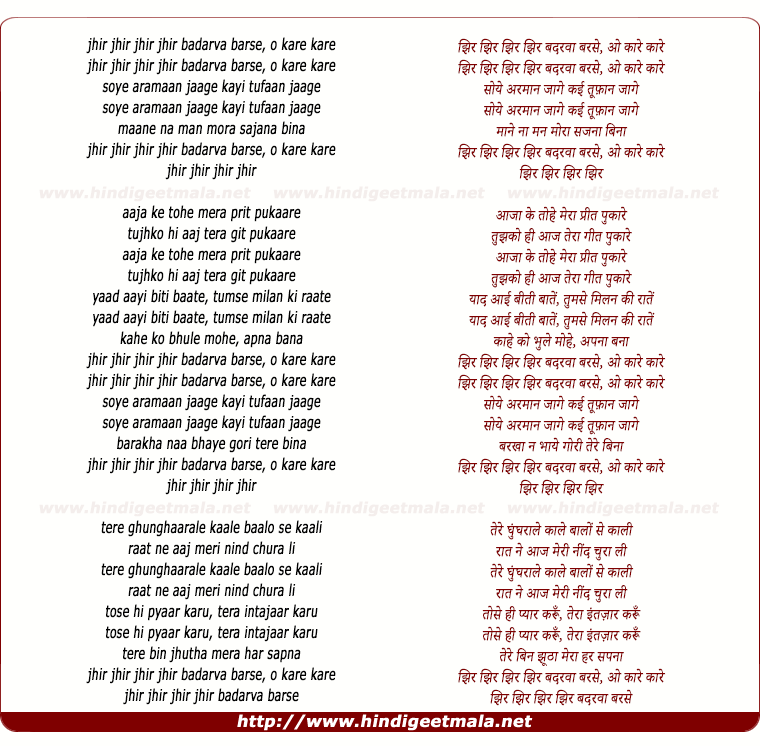 Comments on song "Jhir Jhir Jhir Jhir Badarava Barse"
rameshpuri1 on Sunday, April 24, 2011
@mastkalandr what a beautiful lines you have written my friend...it is so amazing to feel how those people like shailendra salil choudhury sat together and created a miracle of a three minute song on a 78 rpm record...dont you think that we are so fortunate to have loved them at the level of worship...Ramesh Goswami
rameshpuri1 on Friday, April 22, 2011
@mastkalandr yes this happened only in that olden and golden era...the people were emotional and loving..it is a pity we are becoming more and more selfcentred and feelingless...i appriciate your post..good wishes..RG
mastkalandr on Friday, April 22, 2011
@rameshpuri1 Truly said ..in golden and olden era artist were hard working
and honest to oneself un jaise kam ke prati imandar aur samarpit log aaj
kaha din raat kam karne ke baad tanga,bus,train main safar kar apne ghar
pahuchte the,khud Lata Mangeshkar ji ne apne ak interview main bataya tha
ki ak do rupya kisi tarah bachakar station ke bahar tarkari kharda karti
thi. Pta nahi kahan kho gaye apne kam ko ishwar ka darza dene waale wo amar
funkar. May their soul RIP Thanks you my friend

Priya MyMusicalHeaven on Friday, July 24, 2015
Thanks for sharing the link for this lovely song related to 'saawan'
season, MKji. It has been among the favorites for some years now, but I
hadn't heard it frequently on the radio. With such a beautiful melody from
Salil Chowdhury's genius, such lovely words from Shalendra's pen, and two
sweet, melodious voices, no wonder that the duet turned out to be an
enchanting one. Can listen to it several times in a loop. Thank you.﻿

mastkalandr on Wednesday, December 22, 2010
@chamogaa ..pariwar (1956) After the film was completed and the unit
dissolved, according to an interview by the lead actress Usha Kiran, the
unit members wept miserably, so strong was the bondage developed between
members during the course of the film-making. The entire unit literally
lived up to it's name Parivar, meaning family .. very interesting isn't...