Video of this song from youtube
Average Rating : 4.50
Total Vote(s) : 211
Please rate this song between 1 star and 5 stars (5 stars being the best). Just move your mouse on the stars above and click as per your rating. Your rating will really help us to improve our website. 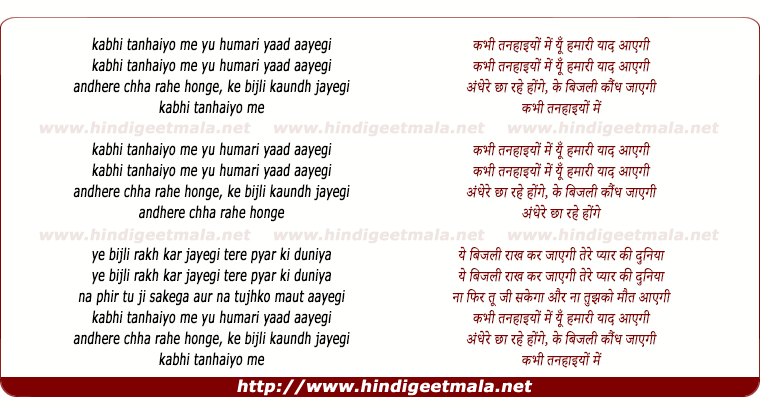 Comments on song "Kabhi Tanhaiyo Me Humari Yaad Aayegi"
P.K. ANILKUMAR ( HINDI MELODY BYTES ) on Monday, November 02, 2015
It is a sad number from the film Hamari Yaad Aayegi. The film was directed
by Kedar Nath Sharma in the year 1961. Lyricist of this song is also Kedar
Nath Sharma. It is picturised on Anand Kumar {son of kedar nath sharma}
in a sad mood...Kabhi tanhaiyon mein yoon hamari yaad aayegi...: This
lovely song from the film Hamari Yaad Aayegi - a Kedar Sharma - Snehal
Bhatkar musical creation sung so feelingly by Mubarak Begum simply lifts
you away to another world. The root essence of this song is the display of
loneliness and solitude, which essentially is the topic of this article
And whats this loneliness or akelapan or tanhai about? Each and everyone on
this planet has to experience this feeling at some point of time or the
other. This element called loneliness .
So touching wordings...nd the way of select image is awsm...fabulous﻿

In your loneliness
you may sometimes be reminded of me
While it would be getting dark,
lightening would suddenly strike

justaname5 on Tuesday, March 16, 2010
Yeah. Jin ki awaaz sun kar, pyaar karna sikha, nafrat bhi karein to kis
andaz se karein, jin ke fun se dil ke jazbaaton ke rang khile, unke baare
mein yeh sab sun kar achcha nahin lagta. There are other stories as well,
which I know first hand - and other singers, including Rafi have done
similar things - but I guess we must forgive them. They were all human
afterall, no matter how badly we want to immortalize them. And yes, Vani
Jairam is another one that didn't get her dues. Bole re papihara..

Sameer691000 on Monday, August 09, 2010
Remembrance of the past is agony, my Lord, seize from me my memories. When
it comes to the land that gave me birth,a gentle golden halo surrounds and
colors my memories, making the present that much more painful and cruel.
What most I long for is not to return to the land of my birth, per se. It
is instead, that mystical, magical place where my memories were formed,
that time when I was blissfully unaware of my adult responsibilities and
burdens. The past is never dead. It's not even past. Thnx