Video of this song from youtube
Average Rating : 4.49
Total Vote(s) : 88
Please rate this song between 1 star and 5 stars (5 stars being the best). Just move your mouse on the stars above and click as per your rating. Your rating will really help us to improve our website. 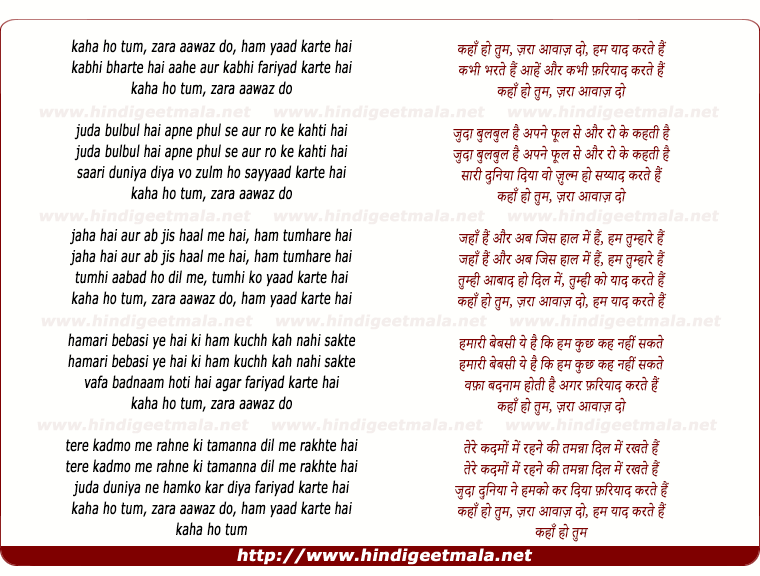 Comments on song "Kahaan Ho Tum, Zaraa Aavaaz Do, Ham Yaad Karate Hain"
orientlover1 on Friday, July 13, 2012
I don't know if this film was successful or not but all its songs are unique. I did not know this immortal song was picturized on Shammi. Great music composed by Roshan Lal and lyrics by Kaif Irfani ( had never heard about this poet before) and of course Lata's melodious voice to go with. Thanks for upload.
orientlover1 on Friday, July 13, 2012
Director of this movie Harish also called Tara Harish also acted in movies like Radhika, Ek hi Rasta etc. and directed movies like Do Ustad, Naqli Nawab, Dada, Malhar, Burma Road. Date of birth 23-10-1916 died 1963.
orientlover1 on Saturday, July 14, 2012
I have seen different posts on this song uploaded by various persons. Some say lyricist of this film was Indeevar while others say it was Kaif Irfani. So what is the truth?
P Vijay on Friday, February 24, 2012
What beautiful and heart wrenching words! कहाँ हो तुम, ज़रा आवाज़ दो, हम याद
करते हैं .. जहाँ हैं और अब जिस हाल में हैं, हम तुम्हारे हैं .. तुम्ही आबाद
हो दिल में, तुम्ही को याद करते हैं .. तेरे कदमों में रहने की तमन्ना दिल में
रखते हैं .. जुदा दुनिया ने हमको कर दिया फ़रियाद करते हैं .. Beautiful words
of Kaif Irfani and unbeatable music of great Roshan .. Sad songs have come
and will come, but no song will ever beat this song .. Even after sixty
years it's melody has reduced a bit.. Amazing!


raqib56 on Monday, September 27, 2010
@alguienPLC
you are welcome !
the couplet has two lines,firs is called asthai & seond anrtara,
you asked the very first part of ASTHAI, which means

Malhar is one of the 3 hundred thousands of raaga, sung during rainy season,
malhar is of Kafee " thaat " ( derived & based on one of the principle 37 ragas & ragnis) malhar means the rythmic ecstasy between a flower and rain drops flirt !