Video of this song from youtube
Average Rating : 4.14
Total Vote(s) : 21
Please rate this song between 1 star and 5 stars (5 stars being the best). Just move your mouse on the stars above and click as per your rating. Your rating will really help us to improve our website. 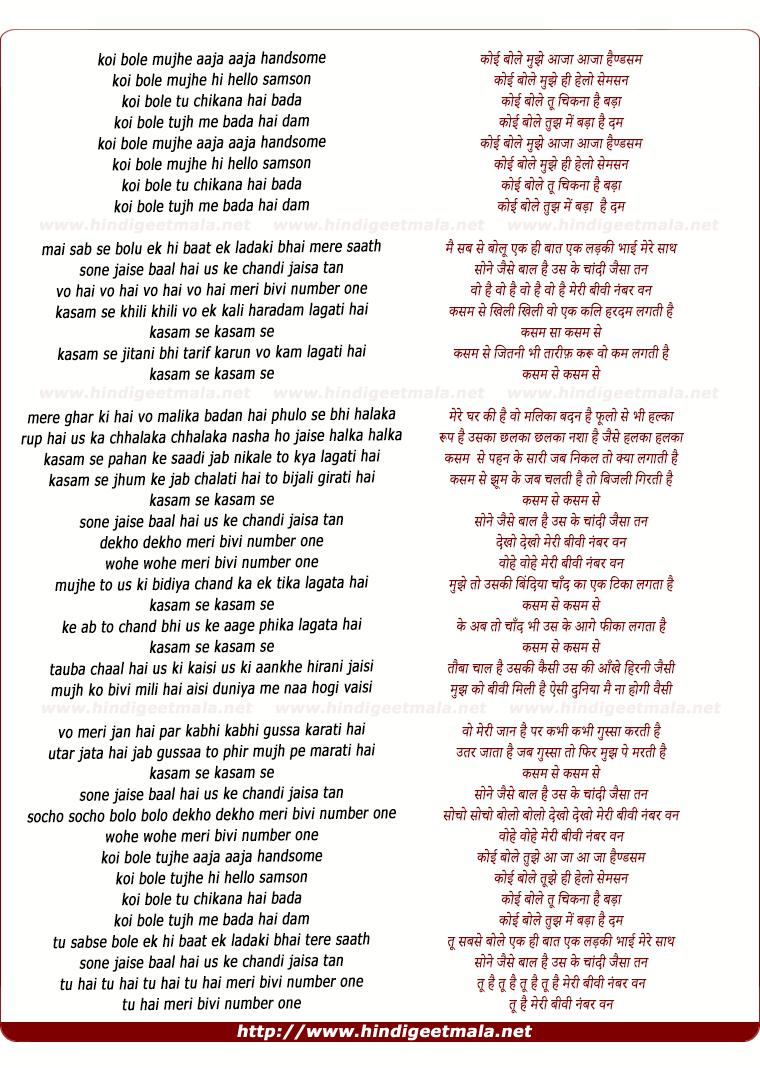 Comments on song "Koi Bole Mujhe Aa Jaa, Bivi Number One"
darpar1 on Friday, June 25, 2010
@injaley I agree with you. I think that's an issue with many of the actors,
especially the ones today. I think many of the actors have more talent than
they show but they don't get the right roles. In movies like Maine Pyaar
Kiya, Hum Aapke Hain Kaun, Karan Arjun, and Veergati, Salman Khan showed
his talent and his ability to act in serious roles. Those movies were made
in a time when actors had to actually act. Those days are pretty much gone
now in Bollywood.

i think this is soo true Nou, she has it.

kArEeNa889 on Saturday, September 25, 2010
I remember I cried like a baby when Lolo got married, bc I've been a fan of
her since I was a little baby. I love this couple so much, Lolo did wrong
in marrying Sanjay and Salman did wrong in gong after the likes of
Aishwarya, what couldnt they see the obvious?? Guess its always like that,

darpar1 on Tuesday, June 15, 2010
@injaley What you are saying is correct but I think it's good that he does
that though. The problem with Hindi movies is they ALL follow the same
format of starting out as a comedy and then turning serious. At least David
Dhawan changes up things a little.

FAH426 on Monday, June 02, 2008
can someone please tell me where i can find this movie with english
subtitles! by da way thanks for postin dis video! i love this couple! they
are da best couple in my opinion!