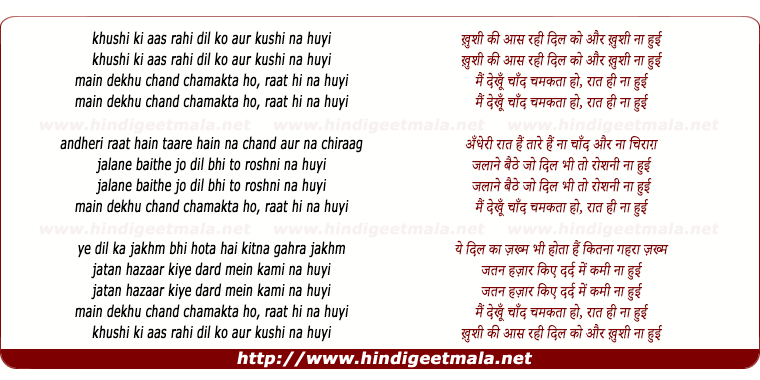 Comments on song "Kushi Ki Aas Rahi"
Moid Hasan on Wednesday, September 21, 2011
A very fine and excellent work done by Bashir Bhai by uploading the﻿ song
from Sawan Ayare 1949,rendered Mohd Hafeez Khan(composer -cum-singer)also
known as Khan Mastana ,who has sung many beautiful songs including the one
in question.The photo clip is quite in synchronization with the lyrical
wordings .I want to discuss about three people who are involved in this
song 1-Kishore Sahu 2 Ramola 3 Arzoo Lucknavi .Due to limitation of space
it is quite difficult to cover all three figures.conti---.

Moid Hasan on Wednesday, September 21, 2011
Arzoo. also knowm as Allama Arzoo Lucknavi ,joined New Theatres im 1936,in
those days there were mostly Anglo Indian,Jews and parsi artist and their
pronunciation was very bad ,Arzoo's services were taken to correct the
language of theses artists and Arzoo did a lot for that cause.As a lyricist
whatever songs he wrote for New Theatres,bcame very popular..Mukti,Street
Singer,Abhagan,Dushman,Aandhi Jawani Ki ReetLagan Doctor ,Haar Jeet and
Nartaki ,were his famous films,He moved to Bombay in ct

Moid Hasan on Wednesday, September 21, 2011
Allama Arzoo moved to Bombay in 1942.,where he wrote songs and dialogues
for Lalaji,Yaad,Fashion,Jawani, Tasveer,Haar Jeet in 1942, Mehboo's(Real
name Ramzan Khan)Roti 1943, Sawan Ayare and many other hits.Thanks Bashir
Bhai rekindling halcyon days of youth when I used to listen to the songs of
these films on Radio Cylon.

Vidur Sury on Monday, September 19, 2011
One of Khan Ji's best songs. He does a splendid job on Kishore (Sahu) Ji
here. Khemchand Ji has used him very well. I hear the film's songs from
time to time and enjoy them a lot. Lovely film (thanks to our
Vintagemelodies Ji) with great music and the best performance was by Ramola
Ji. Thanks for sharing, great job.