Video of this song from youtube
Average Rating : 4.26
Total Vote(s) : 31
Please rate this song between 1 star and 5 stars (5 stars being the best). Just move your mouse on the stars above and click as per your rating. Your rating will really help us to improve our website. 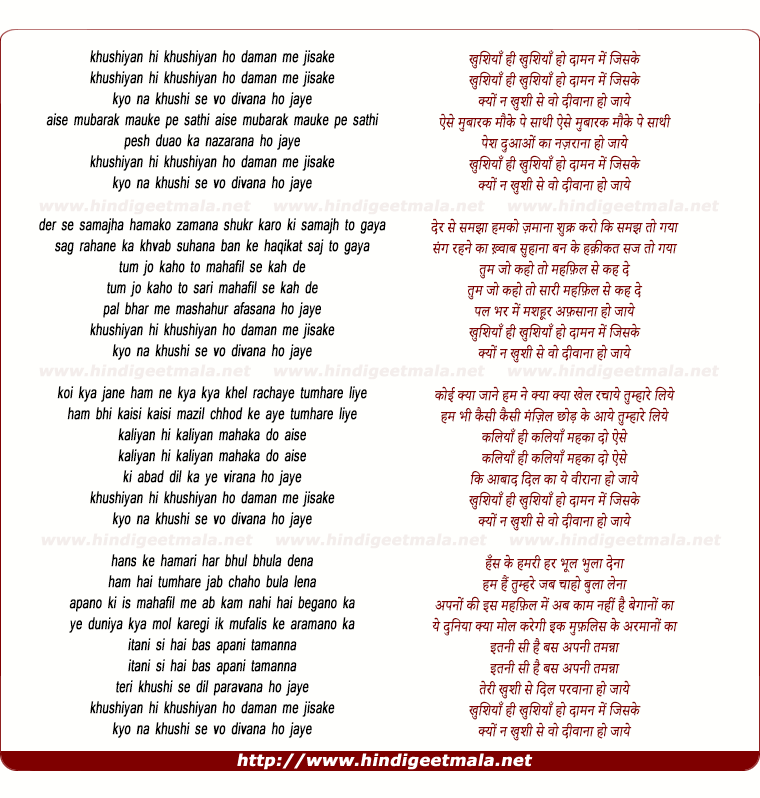 Comments on song "Kushiya Hi Kushiya Ho Daaman Me Jiske"
jaygcin on Wednesday, February 17, 2010
@Makkers1 Sir, I think that MrRagbag is correct. The film (and the music,
too) was really a great success in those days. It is a mistake to judge a
performance from yesteryears by later standards. Michael Jackson's
"Thriller" fails to impress many of the younger generation now, though it
remains the popularmost music video ever. Amitabh Bachchan's "Deewar" will
probably be a flop if released today (HE said so). Only classics stand the
test of time, but unfortunately, there are very few of them.

MrRagbag on Sunday, February 14, 2010
@Makkers1 This film was a huge hit in its time despite new and unknown
actors. But I made the mistake of assuming that you are adult, but you are
obviously a teenager incapable of mature discussion. I dont wish to discuss
any further, goodbye and have a nice day.

MrRagbag on Sunday, February 14, 2010
You have to understand that this is a different era so fashions and styles
will be different, there is nothing to laugh at. After some years the kids
of that time will find todays songs laughable

Makkers1 on Monday, February 15, 2010
People have always said I look younger than my real age. Oh how I laugh
again at your comments, but as you won't discuss any further (I bet you
will) I would like to make further points that will make others laugh when
reading this. The acting in this video must be noted for its hilarity, that
dance is worthy of an all-time comedy, the crowd must've been looking at
something else if they kept a straight face through all this. I couldn't,
so in (our) time honoured tradition, I laugh again.

Makkers1 on Sunday, February 14, 2010
They were laughable then, they are laughable now and will always be
laughable; as your comments are laughable. I laugh again, loudly.