Video of this song from youtube
Average Rating : 4.39
Total Vote(s) : 57
Please rate this song between 1 star and 5 stars (5 stars being the best). Just move your mouse on the stars above and click as per your rating. Your rating will really help us to improve our website. 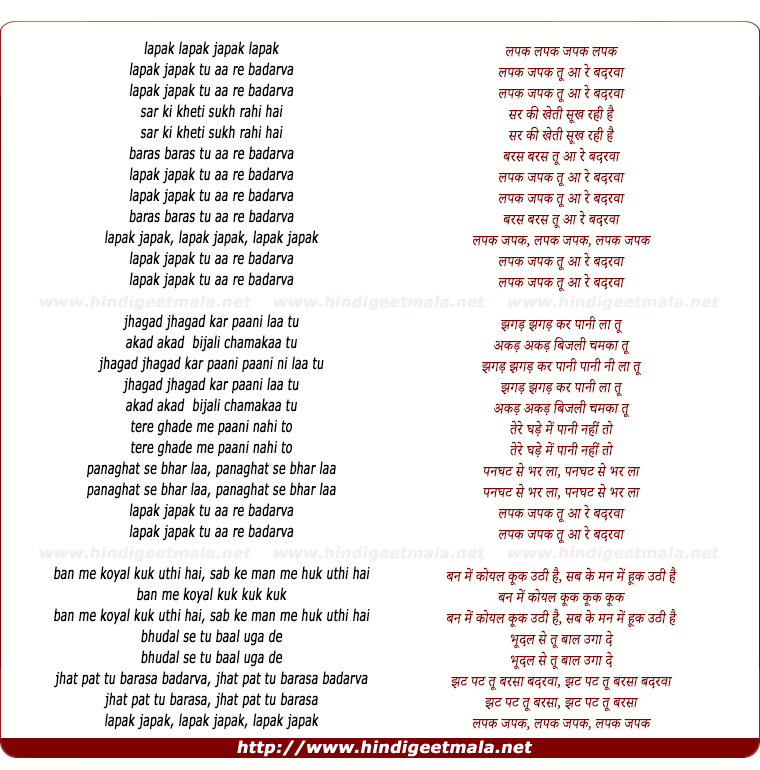 Comments on song "Lapak Jhapak Tu Aa Re Badaravaa"
BOB IYER on Thursday, April 07, 2011
@daughterofthegreat I am afraid it is not so. Miya ki Malhar is born from
Kafi that whereas Darbari Kanada is from Asawari That . Miya Malhar mein
Dhaivath Varjya hai,Aroha aur Avahoroh mein. Darbari Kanada mein Dhaivath
Komal hai Aroha aur Avahroh mein. One can confuse darbari Kanada with Adana
because they are both from same That namely asawari.Compare this song with
Duniya ke Rakhwale which is Darbari kanada ,dont you see the similarities.
For example ,compare "Tere Ghade" n "Mandir girta"

BOB IYER on Thursday, April 07, 2011
One should remember that majority of film songs are not based on a
particular raga or based on more than one ragas . It is very likely that
Shankar-jaikishan have used both Darbari kanada n Adana but mostly this
song is based on the former raga. Film songs are mostly not purely based on
one classical raga ,they are sort of mixture of ragas or fusion of eastern
n western music .The aim is that the end product should be palatable n
pleasing to the ears n catchy.

BOB IYER on Friday, April 17, 2009
This song based on raag Darbari kanada is brilliantly sung by Manna Babu
,one of the most talented playback singers of Bollywood. With the success
of this comical song based on pure classical raga he was made to sing
several other such songs by other directors. "Chalo hato kaheko jhuti
batiyaan ", " Ek Chatur Naar",,Pyaar ki aag mein tan "etc. to name a few.

studer3500 on Sunday, February 01, 2009
many thanks for such a wonderful classical song. I am not keen on Indian
"leading" actors as most (with very few exceptions like Rajinder Kumar)
can't act and copy Western actors like Charlie Chaplin, Elvis etc.
Supporting actors like David, Balraj Sanhi, Mehmood and Mukri were a cut
above the so-called "actors" of past and current era.