Video of this song from youtube
Average Rating : 4.36
Total Vote(s) : 47
Please rate this song between 1 star and 5 stars (5 stars being the best). Just move your mouse on the stars above and click as per your rating. Your rating will really help us to improve our website. 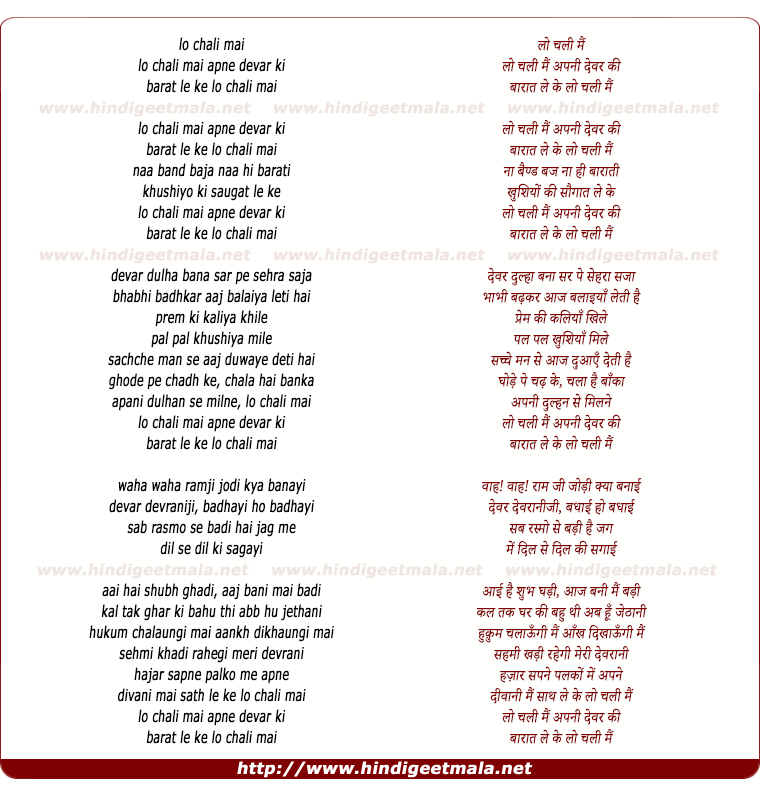 Comments on song "Lo Chalee Main, Apne Devar Kee Barat Le Ke"
rahuljadhao2008 on Sunday, June 26, 2011
what a great relationship betn devar bhabhi . i like movie and song also. i saw this movie 20 times.
jigbhatt on Monday, April 23, 2012
because it produce by rajshree production,and suraj badjatya is the producer.
darpar1 on Thursday, June 18, 2009
I suppose he is obsessed in that sense. It probably does take a lot of hard
work for him to maintain that bulky a body, considering that he is over 40.
Well, he is rich, famous, and handsome, but I heard that he mistreated his
girlfriends. He beat Ashwariya Rai and threatened her, and he poured a
glass of beer over Somy Ali's (another one of his ex-girlfriends) head. As
for Katrina, I get the feeling that she is using him to boost her career.
If he wasn't so brash, I think he would be married.

darpar1 on Tuesday, June 16, 2009
HAHK stands for "Hum Aapke Hain Koun." I didn't know that until recently.
Yeah, the image comparison is really funny. Another interesting thing to
think about is that he is not that muscular in his 1994 movies, but he is
jacked up in his 1995 movies. I wonder how he put on all that muscle in
just a year. As for films by the Ramsey brothers, I thought "Purana
Mandir," and "Veerana" were pretty good. Their horror movies have typical
horror movie elements but aren't really scary, which I like.

darpar1 on Monday, June 15, 2009
I tend to watch the old bollywood films on youtube if they have english
subtitles. Have you watched any of the horror movies made by the Ramsey
brothers? I, myself, was actually thinking about HAHK being remade. I don't
think Salman Khan will be able to put on this image again, though. Lol. In
HAHK, he looked like a nice and sensitive person. Now, he looks like some
player who picks fights with people in a bar. Lol. It's funny to look at
him in Maine Pyar Kiya and to look at him now. Lol.