Video of this song from youtube
Average Rating : 4.47
Total Vote(s) : 1131
Please rate this song between 1 star and 5 stars (5 stars being the best). Just move your mouse on the stars above and click as per your rating. Your rating will really help us to improve our website. 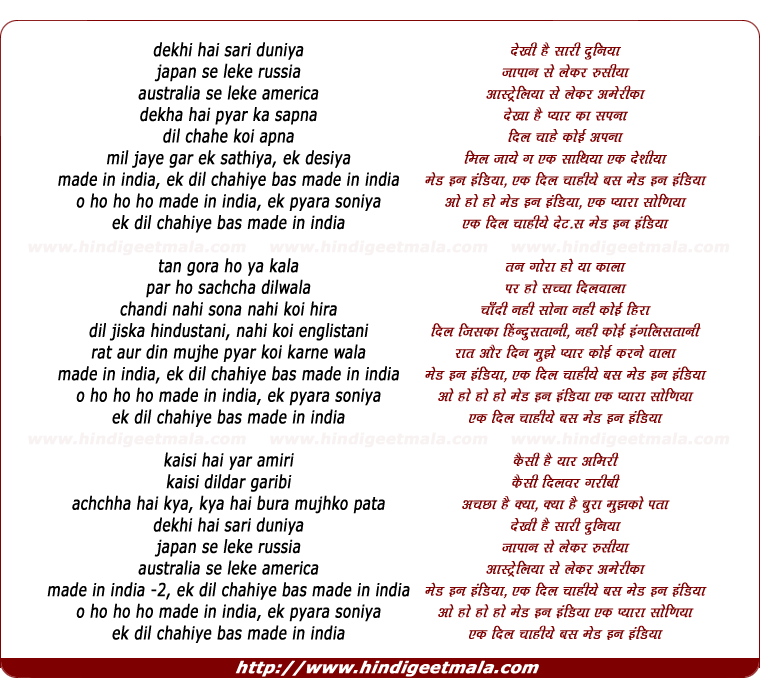 Comments on song "Made In India Made In India"
Mimi Kidman on Monday, September 29, 2014
Let this be !
Even an american man would like to have an american woman as his wife.
This is not racism. She is showing the love that she has for her country.
I respect her for that.

But there are certain bollywood films and songs in which actors and
actresses say that India is the best country in the world, It is the
greatest country in the world. They will make the entire world dance to
their tunes.. In these movies, foreign countries are often criticised.
English people are criticised.
Why do they do so ? Bollywood films are sold internationally. Imagine how
those English people would feel when they are criticised in these bollywood
films. ﻿

Gotah Gem on Tuesday, June 02, 2015
love this song and video. People are reading too much into how she rejected
a "black" man, which goes to show how colored and narrow-minded their own
visions are. She just rejected a non-indian that HAPPENED to be black! The
lyrics clearly say in the same scene, I don't care whether he is black or
white, as long as he has a pure heart.﻿

m2monty on Thursday, August 28, 2014
my favorite one since my childhood .now I'm 26
I used to be waiting for this song at Doordarshan .ahhahahaha
aaega aaega ..aaa gya and TV volume at max.﻿

Loly Polly on Friday, October 24, 2014
i just realised that Katty Perry-Dark Horse music video is based on the
same concept. not sure if Katty copied or its just a coincidence o.O﻿