Video of this song from youtube
Average Rating : 4.44
Total Vote(s) : 106
Please rate this song between 1 star and 5 stars (5 stars being the best). Just move your mouse on the stars above and click as per your rating. Your rating will really help us to improve our website. 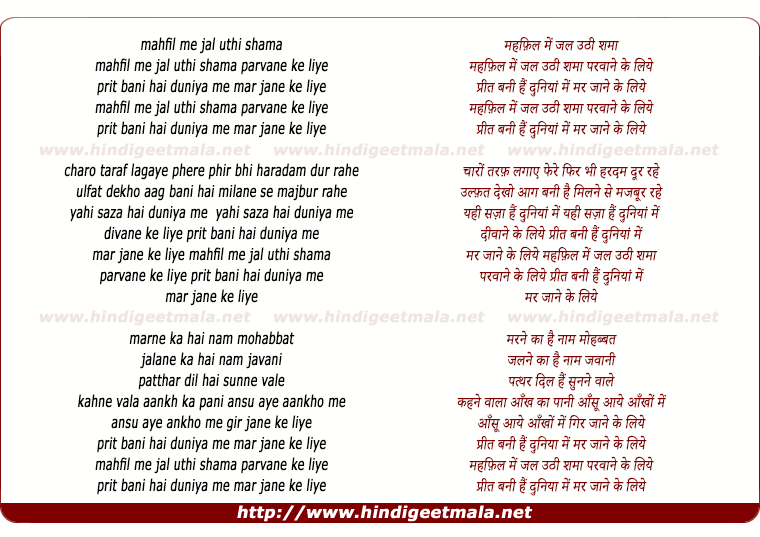 Comments on song "Mahafil Men Jal Uthi Shamaa, Paravaane Ke Liye"
PL AN on Wednesday, May 30, 2012
This song stirs my innermost emotions whenever I remember it.Who can forget
the "Hamesha Jawaan" programme broadcast every Sunday 10 to11 pm over the
then Radio Ceylon, for which this enthralling song was the signature tune
for ages! I yearned to lock myself up, giving a go-by to every other
activity I had to perform, and experience, uninterrupted, those most
glorious moments of pleasure that I wished would remain forever. Every
Sunday was followed by a Monday-the wait continued till the next

Kumar Bhatia on Tuesday, July 07, 2015
Terrific song. Thanks for sharing. Very unusual plot for this song and I am
surprised that the censors allowed it. In the film Madhubala is married to
the guy in the turban (prince) and she is singing this song addressed to
Dev Anand , a former lover and who is a guest. That was 1950. Even today
men would not like their wife to sing love songs to a former lover in
presence of guests. Ridiculous plot.﻿

aramuskguy on Monday, January 07, 2013
What a great song! Another master piece from the team of CR-Lata...No other
music director-singer team came up with such out of the world, heart
rending melodies like these two did. If Lata is an angel, it was C
Ramachandra who brought out that angel in her the best. And I can't really
understand why as many as 8 people ( as of today) would dislike a song like
this. Are﻿ they for real?

Zil Hasnain Kazmi on Thursday, February 10, 2011
Even after fifty odd years, I still keep listening to this song. What a
mellifluous voice of Lata Mangeshkar. I am being enthralled and switched
over to my childhood period. Those were the gorgeous days of peace and
affection among every body. An undoubtedly glorious and unforgettable era,
(10th February 2011)

Narasimhan Ramachandran on Saturday, January 07, 2012
Even after 62 years, this song is so refreshing. I used to listen to the
instrumental version of this song in radio, before the news, as an
adjustment of time. CR deserves a dozen Oscar, Grammy and all awards.