Average Rating : 4.64
Total Vote(s) : 56
Please rate this song between 1 star and 5 stars (5 stars being the best). Just move your mouse on the stars above and click as per your rating. Your rating will really help us to improve our website. 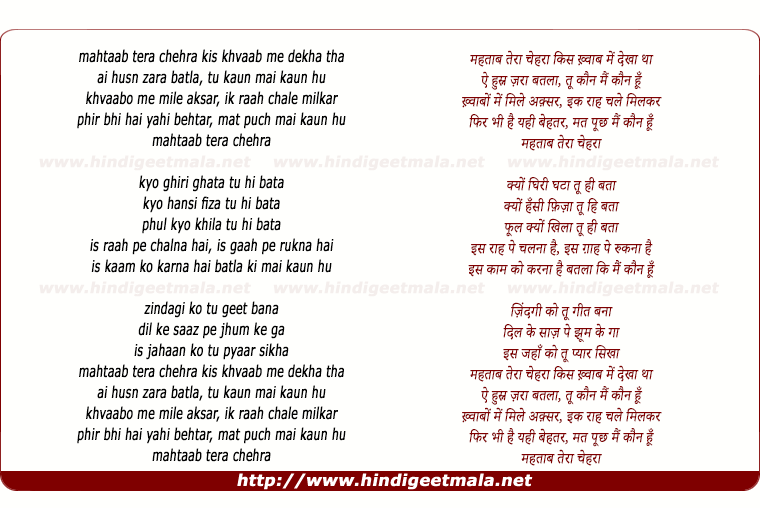 Comments on song "Mahataab Teraa Chehara Kis Khwab Me Dekha Tha"
hira1ft on Monday, August 01, 2011
Big tributes to classic Indian cinema, of course including actors, acteresses, musicians,isingers and songwriters.
But its unfortunate to deny the undeniable contribution of Urdu poetry, and scripts.I read again and again Hindi film, it can be Indian film but whats Hindi?Hindi is a language which had no future without Urdu.in it.plz open your eyes and minds.you cannot hide the sun behind your finger.

Renukaprasad Tumkurbasappa on Tuesday, March 05, 2013
shaliendra, the great lyrics writer blended with the music of shanker
jaikishen and with voice of mukeshji and latalaji- a great treat for music
lovers like me. In my childhood I was fond of this song use to listen often
and often and still in love with this song. Thanks for uploading
mastkalandarji.

Mani Menon on Wednesday, March 06, 2013
'Aashiq' had fared very well at the box office. It's unforgettable
beautiful songs played a major part in its success. The story too was quite
an unusual one. I must confess I haven't seen 'Aashiq'. Though Nanda plays
Raj Kapoor's wife, it was bewitching Padmini who had a very meaty role.

Rmehtacpa on Wednesday, April 27, 2011
The BEST part of the song is starting @1.13 where under SJ's masterly
direction, the tune on Sarangi interlude ending, leads Lata to sing.
Kyun Ghiri Ghata.. and as she has excelled to the top ending @1.31. Same
is repeated @2.10 but the first stanza is too good of playback.