Video of this song from youtube
Average Rating : 4.64
Total Vote(s) : 85
Please rate this song between 1 star and 5 stars (5 stars being the best). Just move your mouse on the stars above and click as per your rating. Your rating will really help us to improve our website. 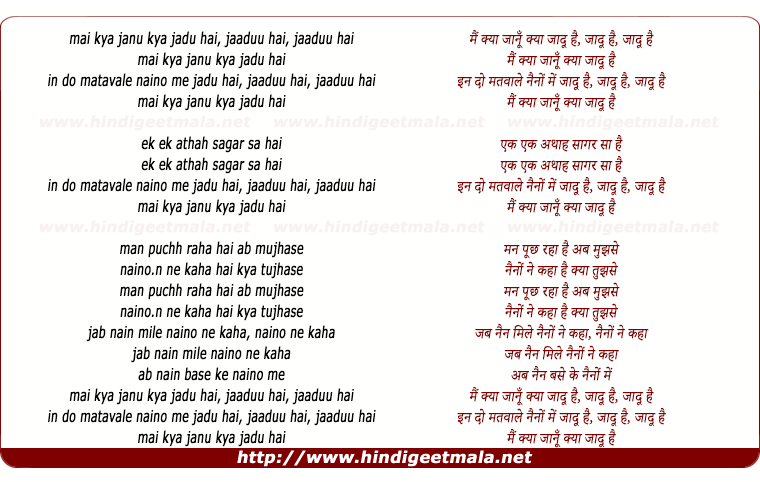 Comments on song "Main Kya Janoon Kya Jadoo Hai"
RituPM :) FEELThePurityPeace&DepthINMusicINYourShr on Wednesday, November 10, 2010
A RARE DELIGHT!! Come to think of It, Isn't it﻿ AMAZING that we're ALL
enjoying this "BEAUTIFULLY sung" Vintage GEM of the LEGEND KUNDAN LAL
SAIGAL "AFTER SEVENTY YEARS" of when he SANG THIS?! :) INCREDIBLE. Isn't
it? !!:) EVEN SAIGALJI COULD NOT HAVE FATHOMED HOW DELIGHTED POSTERITY
would be YEARS down the lane to LISTEN to him sing these, THANKS to some
"MAGICAL" NEW TECHNOLOGY INVENTION, CALLED "YOU TUBE" on the "INTERNET",
that MOST of us TAKE FOR GRANTED!! :) AWESOME! Thanks! 10th Nov.2010'

justaname5 on Saturday, February 06, 2010
I remember hating the voice of KL Saigal in my teens, even as my parents
and grandparents could not get enough of him. Now I myself can't get enough
of his voice. lol...His voice is like well aged wine, one will not
appreciate this voice the first time one hears it, but once you acquire
this taste, nothing else will do! You are hooked forever.

Colonel Rao on Friday, November 04, 2011
This song is one of the most popular one. Lataji in her tribute, sang, but
she was no match to Saigal Sahib. He had his unique style and rendering
ability and voice control and expression of emotion. He was unique by
himself. That si why he is Divine sent singer to us. Thanks for upload.

chaitanyajosh on Sunday, September 26, 2010
A masterpiece!! There is ofcourse the golden voice of the Great K L Saigal
but also the orchestration is quite complex - which considering the early
days of the indian film music is even more laudable.

buttegowda on Thursday, August 20, 2009
Dear Sir, You made my day. Thanks for posters of Zindagi. I hope to see the
upload of other songs from Zindagi. Great music by Pankaj Mullick and
excellent singing from KLS.