Video of this song from youtube
Average Rating : 4.46
Total Vote(s) : 173
Please rate this song between 1 star and 5 stars (5 stars being the best). Just move your mouse on the stars above and click as per your rating. Your rating will really help us to improve our website. 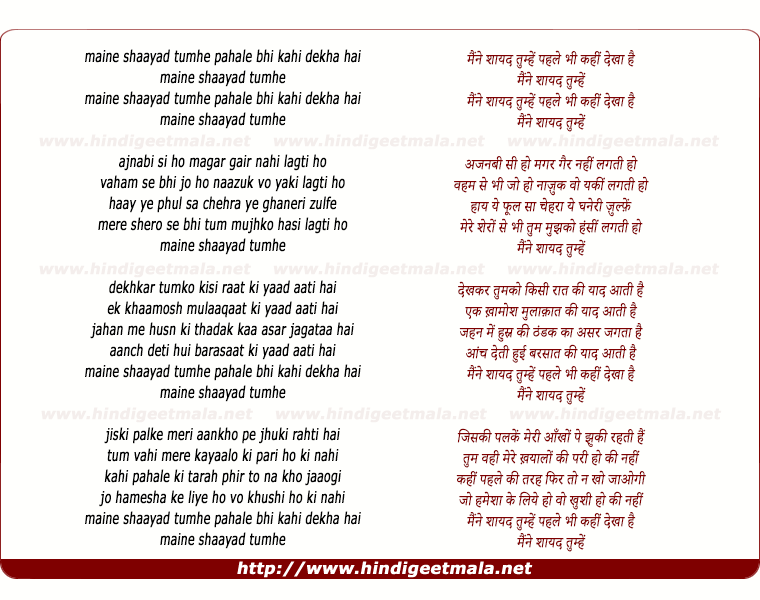 Comments on song "Maine Shaayad Tumhe, Pahle Bhi Kahi Dekha Hai"
apoorva bhatt on Sunday, July 25, 2010
@realityindian Young man, u are mistaken. Rafi saab had 14 different
voices. As per the Music director's demand he was required to sing and that
to make 2 ends meet of his family. If U are a man of music ( where there is
no religion ) U should be knowing that a 4 octave key board was
insufficient to cater to the voice of Rafi saab. Bharat Bhooshan ( like
Pradeep kumar ) was called a ' lucky ' actor. In Film industry there are
classes of stage performers and all the classes have their fans.

muhammad kamran on Saturday, November 08, 2014
Rafi Sahib's voice is celestial; such singers come, may be, once in 100-200
years. The sheer range and versatility of Rafi Sahib's singing is amazing.
Yes, he is going to be remembered for a very long time. We are fortunate to
have his recordings for coming generations to listen and discover for
themselves. Just timeless! SALUTE TO THE TEAM OF ROSHAN SAAB.LYRICS OF SHAR
LUDHIYANVI,RAFISAAB AND THE BEAUTYFUL PAIR BHARAT BHUSHAN AND
MADHUBALAJI.GOD BLESS THEIR SOUL.﻿

shahidrafifan on Tuesday, March 17, 2009
Mohammad Rafi the greatest singer in the world ever. what a voice what control, what skill, what range, inimitable even today. Underrated by indian film industry who only awarded him a handful of awards and none posthumously. Just look at the shear number of difficult songs he sang. A pillar of the industry. They should mourn the loss of such talant every night and every day
Munib Samir on Sunday, February 28, 2010
People say old is gold . I say gold is gold.Does not mater old or new.This
is unfortunate that we do not have any gold these days. Rafi was a gift of
God for the people who understand music as well as the composers of that
time.

suresh verma on Thursday, July 05, 2007
Another gem from 'Barsaat Ki Raat'. Probably Roshan Saheb's most successful
film. Sahir Ludhianvi, as usual, weaves magic with his words. Could anybody
sing it better than Mohd. Rafi ? Just cannot think of anyone.