Video of this song from youtube
Average Rating : 4.45
Total Vote(s) : 58
Please rate this song between 1 star and 5 stars (5 stars being the best). Just move your mouse on the stars above and click as per your rating. Your rating will really help us to improve our website. 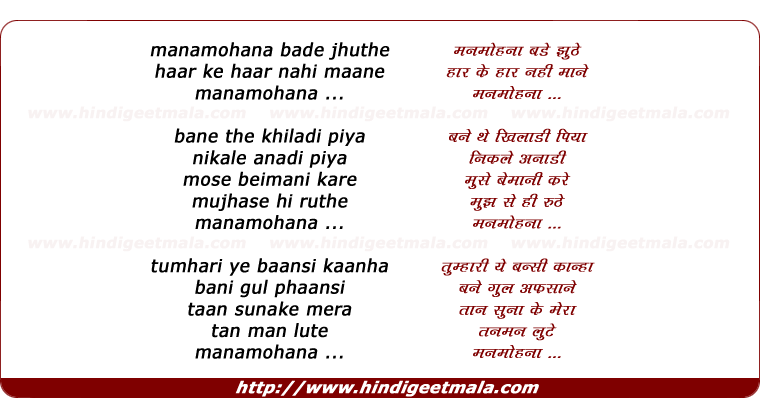 jasbongy on Saturday, February 13, 2010
Thanks Bharat ji for sharing this beautiful song of Lata ji for brilliant
Nutan ji.Lata ji wrote in her book that she enjoed a lot singing for Nutan
,where BNutan also did retakes after retakes to give justice to this
melodious song. Now tell me am i wrong when i call your channel as
''Possitive Viberations.'' where you are picking up the best gems and divin
songs. 10************Ohm Shanti. With respect. Sarla.

MrPartha56 on Monday, December 12, 2011
This song clearly shows what kind of a great Khayal singer Lataji could
have become had she chosen to be a pure classical singer. Who else can
display such a talent with such a sweet voice except her? Hats off to this
inimitable Nightingale with loads and loads of unlimited talent!!

Visveswar .s on Wednesday, May 26, 2010
I feel this song is based on raag raageshri. At times this song sounds
closer to this raag than jaijaivanthi. A close look at the aaroh and avaroh
reveals this matter. An expert opinion from a renowned musician would
clarify the confusion. Any way great song, actress, singer