Video of this song from youtube
Average Rating : 4.35
Total Vote(s) : 1585
Please rate this song between 1 star and 5 stars (5 stars being the best). Just move your mouse on the stars above and click as per your rating. Your rating will really help us to improve our website. 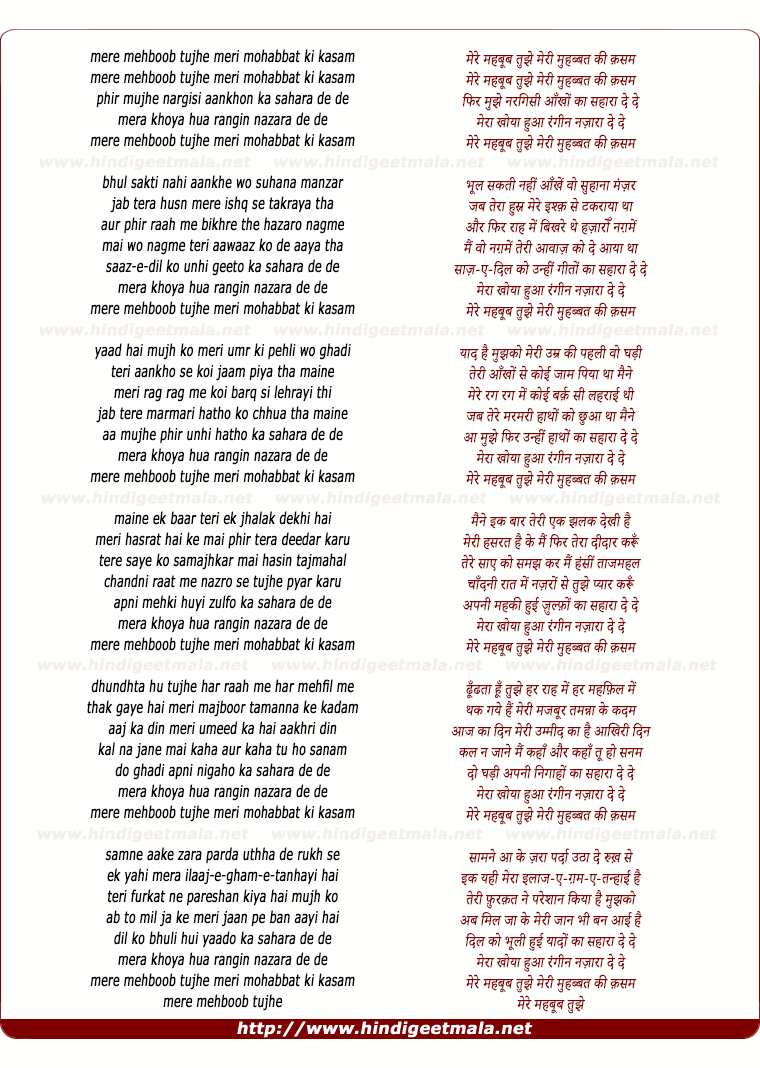 paulkrist44 on Saturday, March 01, 2008
How come Naushad(as in MERE MEHBOOB and so many
movies),Shankar-Jaikishen,Kalyanji-Anandji,Roshan,OP Nayyar(most times,ask
Asha B),SDBurman,MadanMohan,to name a few of the great film music directors
of yesteryears,were able to spin classical Raga based immortal film music
which most of us youngsters of this generation like to hear and sing?It is
impossible to sing any of the present genre of songs,least of all ARR
music,with funny tunes,rhythm,and third-rate lyrics.HINDI FILM MAKERS,AWAKE!

Adithya Shanmugam on Wednesday, August 26, 2009
Most everybody here is praising Rafi for this song. Rafi no doubtely sang
very well...but the real champions of this song are Shakeel Badayuni and
Naushad. Shakeel Sahib had the best lyrics. And ofcourse no words to
describe Naushad Miyan. I have heard a few songs of Rafi - some with not so
great lyrics - and those songs are pretty dry. Not that Rafi is a bad
singer. But I do believe we need to recognize Shakeel Sahib for his
brilliant lyrics.

myyou321 on Saturday, July 24, 2010
I totally agree with you - gafmirza.The world of Mohammad Rafi is pure and eternal and when he sings its like showers blessings. What raag, what sur, what voice, everything is there in this song..My God this is beautiful singing. And hatsoff to the lyricist of this song and last but not the least...Composition is awesome. But I can still rate Rafi sb. on top of everything. He is the winner here.