Video of this song from youtube
Average Rating : 4.55
Total Vote(s) : 56
Please rate this song between 1 star and 5 stars (5 stars being the best). Just move your mouse on the stars above and click as per your rating. Your rating will really help us to improve our website. 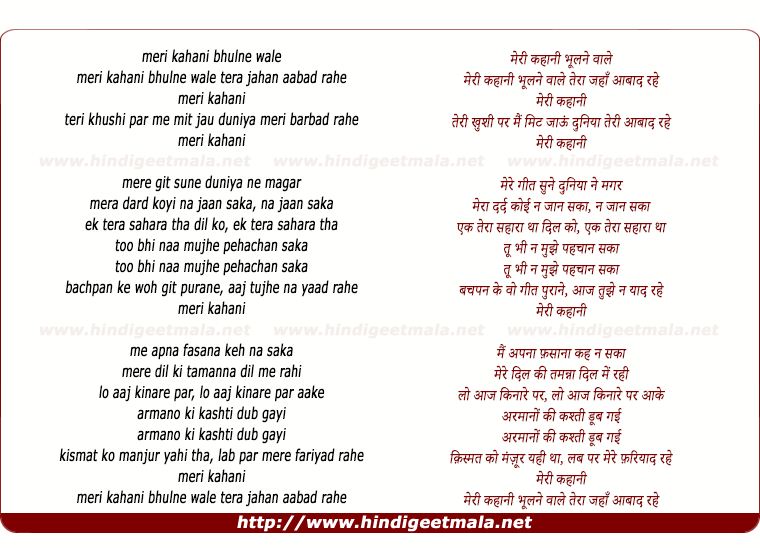 Comments on song "Meree Kahanee Bhulne Wale"
Surender Bhutani on Monday, February 18, 2013
A heart touching song penned by Shakil Saheb.From this film onwards a
trinity (Shakil, Naushad and Rafi )came into being in the film industry.
Deedar had a very powefulr story and there was a big scope for fine music.
Practically in every reel there was a song. Naushad was really good just
like Shahjahan, Amar ,Baiju Bawara and Shabab.

sonny19xx on Saturday, May 02, 2009
Where are these days gone ? Will these ever come back ? More and more you
listen to such songs more and more you realize the sad depths to which the
current day Bollywood songs have fallen. THANKS A MILLION rumahale Naushad-
Rafi - Dilip , what more can a fan ask for.

tk yaheya on Tuesday, March 03, 2009
A big thank you! Perrenial favorites of all times. Will remain in our
hearts till the end. Greetings from Sri lanka - Ceylon.