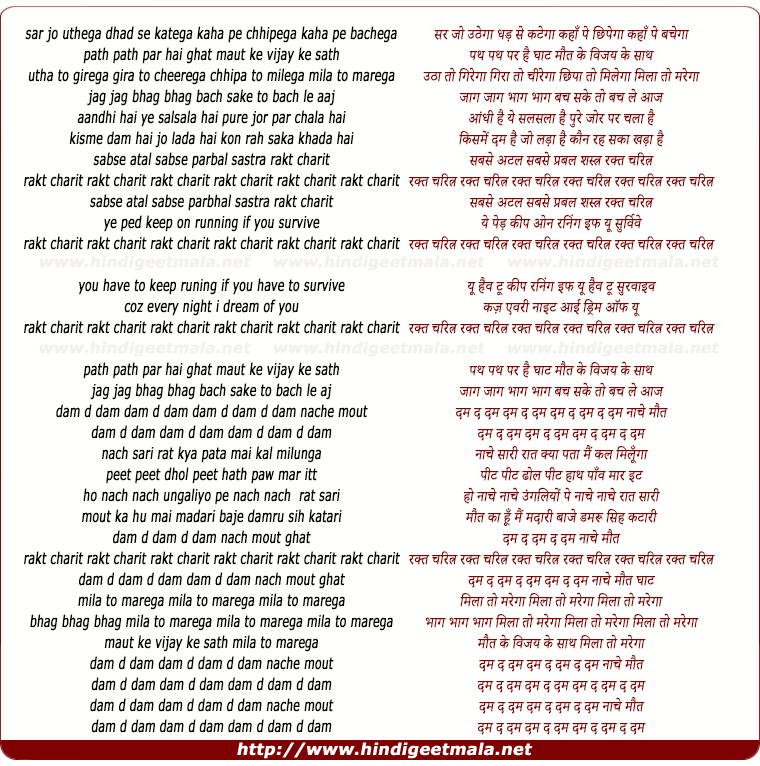 Comments on song "Mila To Marega"
Gessler IDF on Saturday, July 20, 2013
No he did not die because of the bombs. Wikipedia is wrong at that point.
It is true the assailants hurled crude bombs (which were actually
smoke-dispensing bombs packed with a small amount of explosive in them in
order to spread the smoke out quickly). The bombs were really not lethal
enough to kill anyone on the spot. The bombs were to throw the crowd into
chaos while the assailants pulled out guns and shot him (infact they spent
the prior 6-7 hrs practicing with guns at a hillock nearby).

San Keerth on Friday, May 04, 2012
who liked one girl n went to her house at mid night n said her parents to
stay outside for some time... next day he goes again for some months...
paritala ravi in an interview said about the situation at those times...
his brother was killed in middle of a mela in front nearly 20 police ppl
and some 300 crowd... by the night the police came to him with an arrest
warrant on him as he killed his own brother when he just arrived from hyd
for the funeral..

Karan Bhardwaj on Saturday, July 20, 2013
quote from wiki.."Paritala Ravindra, was killed in a crude bomb attack
in Anantapur town on 24 January 2005. The assailants, lying in wait, hurled
bombs at him as soon as he came out of the TDP office in the town after
attending a meeting. He died on the spot, while several others, including
his gunmen and private security guards were injured. Paritala Ravindra's
supporters alleged the hand of his Congress rivals behind the murder.[3]"

vinurom on Thursday, July 18, 2013
It really happened man, search for "Paritala Ravi Murder" in youtube, Vivek
oberoyi portrayed Paritala ravi of Andhra. Each and every sequences in this
movie was taken from the real incident happened in Anantapur district of
Andhra. Even after the release of this movie,the real bloodshed is
continuing, the Character Surya(Suryabhan Reddy) was killed by Paritala
ravi's Son. It may become the 3rd part,don't know.

vinurom on Thursday, July 25, 2013
Actually Wiki gives wrong info in this matter, the assailants just threw
tiny bombs to create a violent situation and to remove the gunmen of
Ravi,One of the assailant Moddu Seenu alias sreenivasa reddy later
surrendered & claimed that he actually shot Paritala Ravi,(Ajaz Khan as
moddu seenu in the movie),Postmortem report and the images of his dead body
shows the same thing.

View all 48 comments related to song Mila To Marega