Average Rating : 4.38
Total Vote(s) : 69
Please rate this song between 1 star and 5 stars (5 stars being the best). Just move your mouse on the stars above and click as per your rating. Your rating will really help us to improve our website. 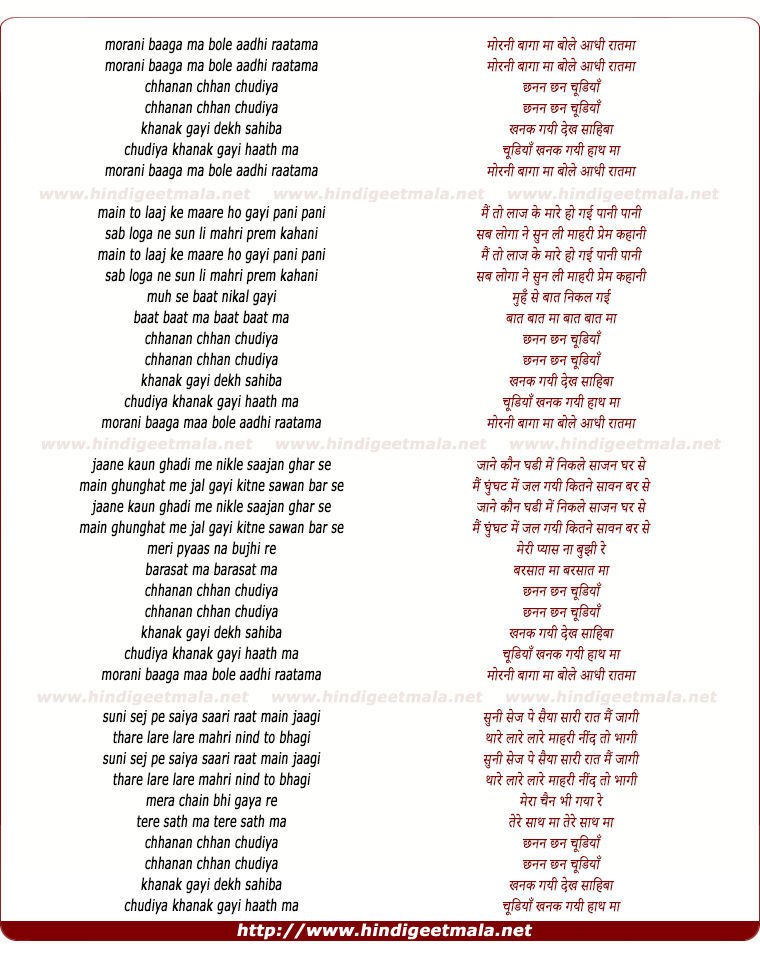 Comments on song "Morani Baagaa Maa Bole Aadhi Raat Maa"
Raovarinder Tilk on Monday, March 01, 2010
I can not understand why Yash chopra is unable to convince Sridevi to come
back into his films. Yash chopra and Sridevi is a perfect team and he knows
very well that Sridevi is the only actress in bollywod who can give him a
mega hit after such a long time. He has already tried the new lot in his
movies and could not achieve that much success as he achieved during
Chandni and Lamhe with her. I hope one day sridevi will rock the silver
screen again.

sabbirsa on Friday, June 11, 2010
I think that for yesteryear actresses it very very difficult to make a comeback these days with all the new actresses. and of course for sridevi to come back the subject of the film has to be and must be such that revolves around her and only her. Its almost impossible to do that. sridevi is a very smart lady. I mean she knows that she is not going to get that subject and is in no way wants to compromise and she must not.
sabbirsa on Friday, June 11, 2010
one of the greatest performances by an accomplished performer to ever grace the Indian film Industry. She had the ability to capture audience through her amazing acting, grace, aura and everything. When I saw the Filmfare nomination I said to myself I can close my eyes and announce Sri the winner. Don't even have to look at other nominees.
deep388 on Sunday, February 28, 2010
This song transports me back to the sand dunes of rajasthan...such a melodious track, the feel to it is not something I have felt in much of today's bollywood songs sadly...old is always gold, and Srideviji and Lataji are just beyond any words in this song...
wlaraj123 on Saturday, July 03, 2010
Sridevi was awesome in this movie. No words to describe her acting prowess
in this movie. One of the best female performance in the history of Indian
Cinema. This double role is so complex to potray but a cakewalk for the
greatest actress of all time.