We will add it as and when it becomes available.
Average Rating : 4.38
Total Vote(s) : 69
Please rate this song between 1 star and 5 stars (5 stars being the best). Just move your mouse on the stars above and click as per your rating. Your rating will really help us to improve our website.


Comments on song "Morani Baagaa Maa Bole Aadhi Raat Maa"
bauhaustoronto on April 22, 2009
What a beautifully choreographed and sung song! Of course Sridevi and Lata
are at their best here as well.

jankilaxmi on May 06, 2009
Love this movie and the song.
drjibran21 on May 11, 2009
i jus luv the start of the song really cool rajhisthani style ..luvly! lata n ila rocks
xNymphetamynexGurlx on May 14, 2009
Who's the other dancer? The one at 0:20?
xNymphetamynexGurlx on May 15, 2009
thanks! I knew about Lata ji and Sridevi but I just didn't know Ila.
Ahsan Mughal on June 18, 2009
amazing fantastic excellent
nsuraj2006 on June 24, 2009
One of the best performances by Sridevi
buzziinboi on June 26, 2009
Yeh man, Ila Arun has a very good rustic voice, most popular for the Choli
Ke Peeche song and recently with the Ringa Ringa track.

khutyo on July 01, 2009
i love this song. sridevi is simply excellent in this song. her expression of her eyes simply makes her the all time best actress in bollywood. can anyone please upload the HQ quality of this song.
bombaibabu on July 02, 2009
It's in YRF video list but ILA Arun's introductory sequences is edited .Check out.
bombaibabu on July 02, 2009
I like Lataji's part most ,but like Ila Arun's part as well.
rj757575 on July 10, 2009
beautiful song ..thanks for uploading
bobbyfaith on July 13, 2009
thanks 4 upload.
highlanderscotborn on July 22, 2009
bubbly Sridevi set the trend for most heroines to copy this style.
highlanderscotborn on July 22, 2009
good this song came into the safe hands of Sridevi!! Otherwise such a
beautiful song would have gone to some monkey like actress.

thetoughsoul on August 11, 2009
love this song.
such a beautifull song:)

If she was in this song, then she would have added some of her 'latkhas' and would ruin this classic song !

highlanderscotborn on August 14, 2009
exactly! Look at 1.06! What a beautiful expression, makes me smile and want
to hug Sridevi ji for that cute expression. She reminds me of a cute little
bird!

bombaibabu on August 31, 2009
The've made prank so pls don't make it issue pals..let this video live in peace..lol.
jankilaxmi on September 08, 2009
I did knot know that Bobby darling also got some fan following..lol
Unpredictablesoul11 on September 18, 2009
Very Nice song ,Sridevi danced is superb ,Anil z looks like his younger brother Sanjay
Unpredictablesoul11 on September 18, 2009
Very Nice Song ,Sridevi's dance iz superb n Anil looks like his younger brother Sanjay
Desi4evah on September 20, 2009
he's talking about Madhuri.
Desi4evah on October 04, 2009
go give him negative ratings... y me?
mpawan09 on October 09, 2009
this is a very beautiful and marvelous song.i also like siridevi and anil kapoor very much.
khutyo on October 28, 2009
sridevi is the best. i mean just look at her expression of her eyes her face. she don't even need to dance a lot bcoz her expression of her face tells the whole feel of this song. i think she is the best actress of all time in india.
MrFakeaccount15 on November 04, 2009
Awesome!! Lata ji is simply great!!! Thanks for uploading this song..its my one of the favourite movie too!!!!
violet156 on November 06, 2009
lyrics are so good!
Ash D on December 06, 2009
Did her skirt catch on fire at the end of the song? In the movie i
mean.seems that way.

Dealluded on January 01, 2010
Nope...the first time I watched this, many years ago, I thought the very same thing. She was fine at the ending. Do a search on "Lamhe", you will probably see it here on YouTube.
bobbyBollyfan on January 01, 2010
In her sublime screen persona Sri is able to evoke the splendour of old:
this is a song suited to Hema, Vyjayanthi, Madhubala et al and yet her
incomparable aura & even shamantzen, i.e. spellbinding power endow it with
a freshness delightfully refreshing as it is refreshingly delightful.
Plaudits must also go to Lataji, whose effort ensured the elements flowed
masterfully without ever succumbing to anachronism. Thank you & a very
Happy New Year to you:)


Sandip Bhalerao on January 01, 2010
@sreedevifan...MrFakeaccount15 is my fake id to watch and comment on
unsensored material on youtube..however, was logged on automatically on
that day and seen this beautiful song...:)

Nancy Yang on January 20, 2010
the best about sreedevi was her vitality...her face was always so
animated...love her.

pema tsering on February 08, 2010
wow.. sridevi is such a legend actress. wish she could just stick little
longer in cinema. she would surely offer us more great movies with her
superb acting.

Bianca Ortega on February 18, 2010
i lovveeeee this song!
sjunu on February 20, 2010
my all time favorite song and movie.
deep388 on February 28, 2010
This song transports me back to the sand dunes of rajasthan...such a melodious track, the feel to it is not something I have felt in much of today's bollywood songs sadly...old is always gold, and Srideviji and Lataji are just beyond any words in this song...
Raovarinder Tilk on March 01, 2010
I can not understand why Yash chopra is unable to convince Sridevi to come
back into his films. Yash chopra and Sridevi is a perfect team and he knows
very well that Sridevi is the only actress in bollywod who can give him a
mega hit after such a long time. He has already tried the new lot in his
movies and could not achieve that much success as he achieved during
Chandni and Lamhe with her. I hope one day sridevi will rock the silver
screen again.


mariayaya on March 04, 2010
Wow! I miss my childhood, I use to watch this movie with my mom on my days off from school! Miss the good old days, the movies back then were really beautiful!
optionok79 on March 09, 2010
one of my fav movies... one of my fav songs... whenever i listen to this song i am flashed back to my childhood memories... GOD... i miss old times. was and is in love with movie.. there is some thing about this movie that just touches.
teenbauwa on March 23, 2010
Sri's movements are so swift..she swings...seems effortless
sweetstranger1 on April 15, 2010
just wanted to give appreciation to lata mangeshkar - no1 else could have
sung the song like her n it suits sridevi so much! xx

12shamlee on May 02, 2010
great video..ive learnt dancing looking at sridevi!!
sabbirsa on June 11, 2010
I think that for yesteryear actresses it very very difficult to make a comeback these days with all the new actresses. and of course for sridevi to come back the subject of the film has to be and must be such that revolves around her and only her. Its almost impossible to do that. sridevi is a very smart lady. I mean she knows that she is not going to get that subject and is in no way wants to compromise and she must not.
103 comments related to song Morani Baagaa Maa Bole Aadhi Raat Maa shown on 3 pages.
Popular Links on HindiGeetMala 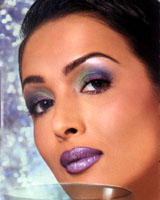