Video of this song from youtube
Average Rating : 4.44
Total Vote(s) : 91
Please rate this song between 1 star and 5 stars (5 stars being the best). Just move your mouse on the stars above and click as per your rating. Your rating will really help us to improve our website. 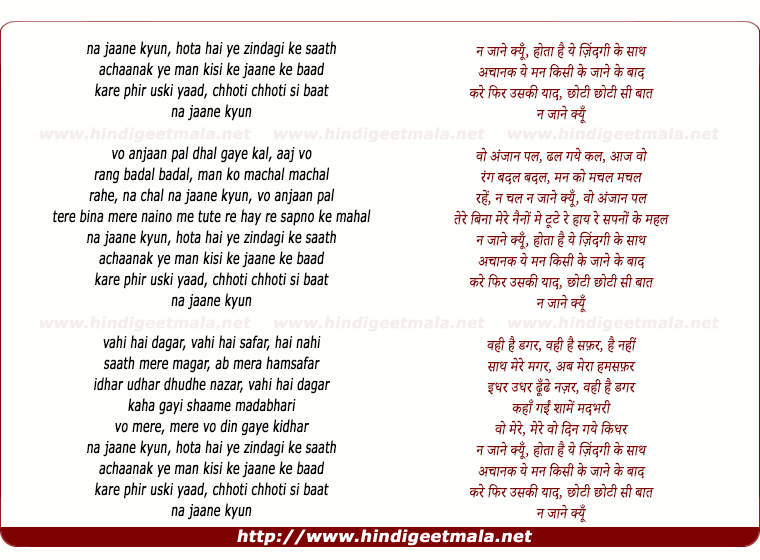 Comments on song "Na Jaane Kyun, Hotaa Hai Ye Zindagi Ke Saath"
Galavya41 on Tuesday, July 19, 2011
@petals7777 Actually this was directed by Basu Chatterjee . Both HrishiDa's
and BasuDa's films have a similar feel because they believed in the so
called " Middle Cinema" , basically what this means is that their cinema is
a combination of the serious " Art" style and the commercial " masala"
movies , they mixed both these disciplines their new form came to be known
as 'Middle films' and this is also the reason why such films are more
enjoyable as well as believable .

silentdeewani on Wednesday, January 13, 2010
Certainly one of my favorites! Has a deeper meaning to it.


Dont know why it so happens in life
After this someone leaves, suddenly your heart
Starts thinking about the little things associated with this someone

Sorry bad translation! Please let me know if there is a better one or please translate and post the meaning of the entire song.

manz arya on Wednesday, December 03, 2008
The 70's era shown,especially in hrishikesh mukerjee's movie's really
touch's comman man. It takes you to a much calm,relaxed and sweet mumbai
then.i was born in '82, wish could have born in 70's would have been just
like Amol palekar in his younger days. Yes decade's on mumbai has changed a
lot. hope we could have brought back the old mumbai.

N H on Friday, August 01, 2008
This is such a melodious,song by "Salil Da" the great, that one keeps
humming it for days."Vidya Sinha" did justice to portray "the girl next
door" in this lovely movie by "Basu Chatterjee".I simply love the choir
used by mastreo,"Salil Da" so beautifully!(Thanks ilovehrishida for posting
it)

brj79 on Tuesday, June 03, 2008
though i din't born in India, we have an advantage that we can understad
the language so we nepalese r relishing all beutiful songs of hindis. I luv
all old songs and movies, i have no words to confer my gratitude. Thanks to
everone who made our life beutiful.thnks thnks thnks