Video of this song from youtube
Average Rating : 4.37
Total Vote(s) : 90
Please rate this song between 1 star and 5 stars (5 stars being the best). Just move your mouse on the stars above and click as per your rating. Your rating will really help us to improve our website. 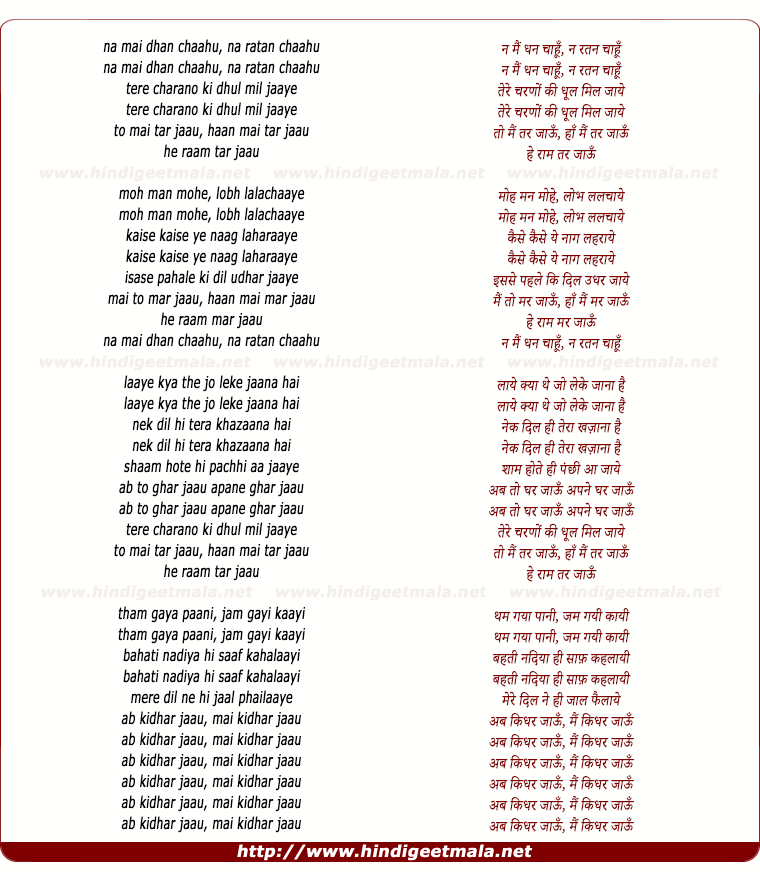 Comments on song "Na Main Dhan Chaahun, Na Ratan Chaahun"
rumahale on Saturday, April 06, 2013
Being of Indo Aryan source, our Konkani language has Hindi words, which are
also modified while speaking; I understand Hindi to some extent, but,
worried of vocabulary and grammar (especially gender, tense, preposition
etc.). Here, I came across three unfamiliar words (बेबस, बखूबी, उजागर),
and, I have since referred dictionary to know the meaning. Thank you for
the positive response.

Psyche1954 on Tuesday, August 25, 2009
Of course music is by sri Jaideva and film Hum Donon! Dev Anand and Nanda and Sadhana it has the fist antara extra which was not released in the EP and was only on the sound track of the film!
Vasant Pusalkar on Thursday, March 29, 2012
Dear ShemarooEnt, Thanks for uploading a nice song. The tune was given by Jaidev who was S.D.Burman's assistant for this film. Very good bhajan.
SYED ALI on Sunday, September 30, 2012
A great mystical song filmed on legendary great NANDA making her eternal. An outstanding heroin with serene beauty whose exceptional glamour and glitter starts from where all beauties reach their climax outperformed and outlives everybody with her superior talents and all through lived a life with grace and dignity. God bless her. Thanks for Youtube.com for affording me yet another opportunity to witness this grand lady of my great liking and a devi to me in her finest.
Vinay Hegde on Friday, April 12, 2013
SD Burman of course was a great composer. But the beauty of this song is
also in its situation and picturisation. Song picturisation was Vijay
Anand's forte. Here you have the irony of Dev Anand bringing home his loot
from the black marketing he does, while his mother and sister are singing a
spiritual song which talks about the evil of money!