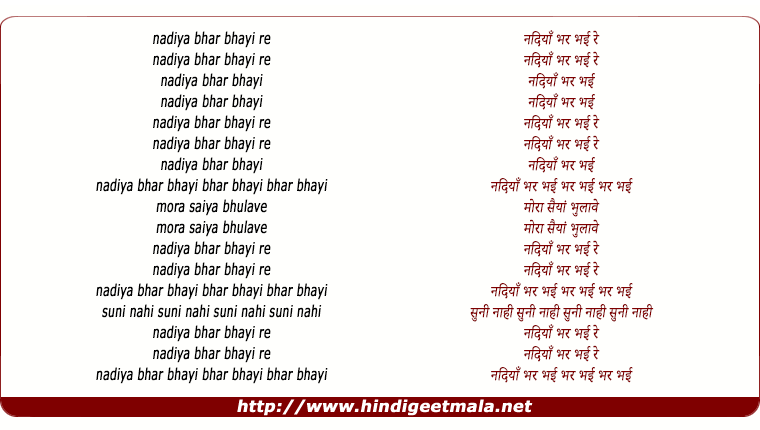 Comments on song "Nadia Bhar Bhayi Re"
Wild Smokey on Thursday, March 26, 2015
I'm really sorry to be saying this, however this song is a disappointment.
Not because of the music and the composition, but because of the singer.
She has absolutely missed the beat and the heart of the song. I am not
going to compare it to the original however the singer is not trained well
enough to try and perform a raaga of this nature.

I am sure she can sing well however this is not what she needs to be
singing. And again this is just my personal opinion and I mean no offence
to anyone here. I've listened to this song 7 times now and I just cannot
appreciate it in the way it has been sung by her. She was on the wrong foot
from the get go. Come on, the pronunciation of the word is 'Bairi' which
means 'enemy'. And she has pronounced it each and every time as 'Bhairi'
which mean 'Deaf'. And then she keeps losing the tone and the pitch of the
raag. The composition and the music is great and I appreciate that.﻿

MERU Concerts on Thursday, July 19, 2012
It’s a story of a desperate girl who passionately desires to go to her
beloved on the other side of the river. The river is having floods…‘Nadiya
bairi bhayee,-‘the river has become hostile’ (mispronounced here as ‘bhari
bhayi’ would mean ‘is full’).She is pleading to the boatman saying, ‘my
beloved is calling’ ‘mora saiyan bulave’ (mispronounced as ‘bhulave’ which
would mean ‘forgetting’). She laments, the boatman is ‘not agreeing’ to
take her, ‘sune nahi…’. Language apart, very well sung.

Sherrin Varghese on Saturday, February 11, 2012
Shankar.. Im a huge fan of your work, enjoyed every bit of your material
since O re piya.. please make original material also.. You are so
talented.. I have even learnt a couple of things from your renditions but
this one, I wasn't very impressed with on the choice of the voice.. Don't
get me wrong, Jaunita's definitely got the pipes, but wrong modulation
choice for this composition. Maybe i'm biased cos i love this song and have
been performing it for ever.. My 2 pence..Apologies...

danceportal06 on Monday, March 05, 2012
@indianambassador I complete agree! The day he gets a filmfare award I
would probably cry from feeling happy for him. He is one unique person who
had music choose him. He could have easily been a regular musician amongst
the thousands and thousands of musicians in USA or wherever, but he was
chosen to be unique.

Akshay Iyer on Saturday, February 11, 2012
Wonderful song selection!! As a layman, I was particularly impressed with
the flute and the clarinet. The selection for the voice was really good
though I think Jaunita faltered at some places due to self-consciousness.
Barring that one flaw, I think the song works beautifully in totality.

View all 216 comments related to song Nadia Bhar Bhayi Re