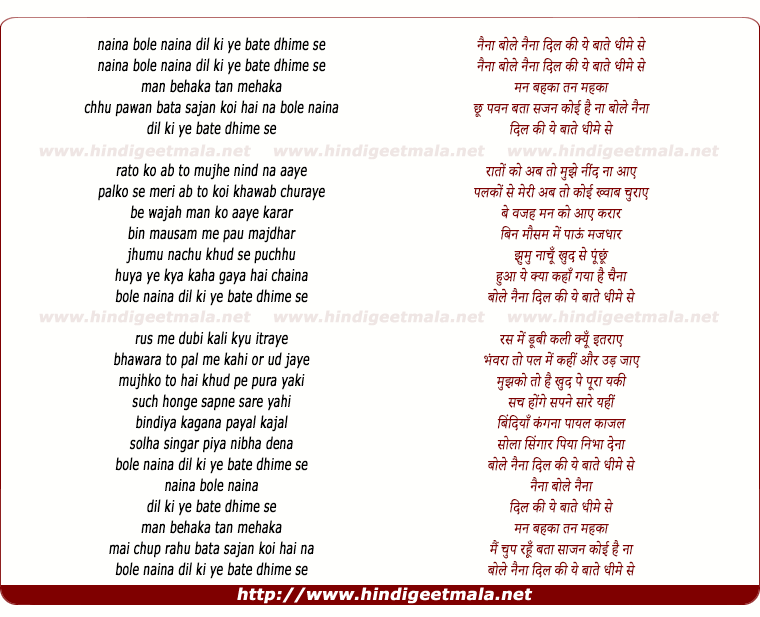 Comments on song "Naina Bole Naina"
chandrashekharjain on Sunday, November 21, 2010
Ilayaraja is the best.
I did not know he gave music to Hindi songs as well1

Unknown090981999 on Wednesday, May 27, 2009
I love both the versions, Hindi and Tamil. I actually first saw the Tamil version ( thanks to Halimali ) pictured on Sridevi, it was very powerful and it gave me shivers. Now seeing this version, I think it's very powerful and amazing as well. But maybe I prefer the Tamil one. Amazing song!
irthemes on Saturday, June 06, 2009
A very rare video indeed. Thanks. Personally, the Janaki amma's original is so deeply ingrained in me that I am unable to shake it to welcome this version, even though this one is greatly sung by the living legend, Ashaji.
Kumar Nath on Thursday, December 08, 2011
Ashaji is undoubtedly a good singer. but in this song it is Janaki amma who stuns everyone. she simply rox. her expressions were beyond explanations... its sad dat she is yet to receive Padma awards.
halimali on Wednesday, April 29, 2009
I love Asha Bhosle, but I prefer the original Tamil version in everything, singing, atmosphere , picturization and of course SRIDEVI!!!
View all 33 comments related to song Naina Bole Naina
Popular Links on HindiGeetMala