Average Rating : 4.00
Total Vote(s) : 5
Please rate this song between 1 star and 5 stars (5 stars being the best). Just move your mouse on the stars above and click as per your rating. Your rating will really help us to improve our website. 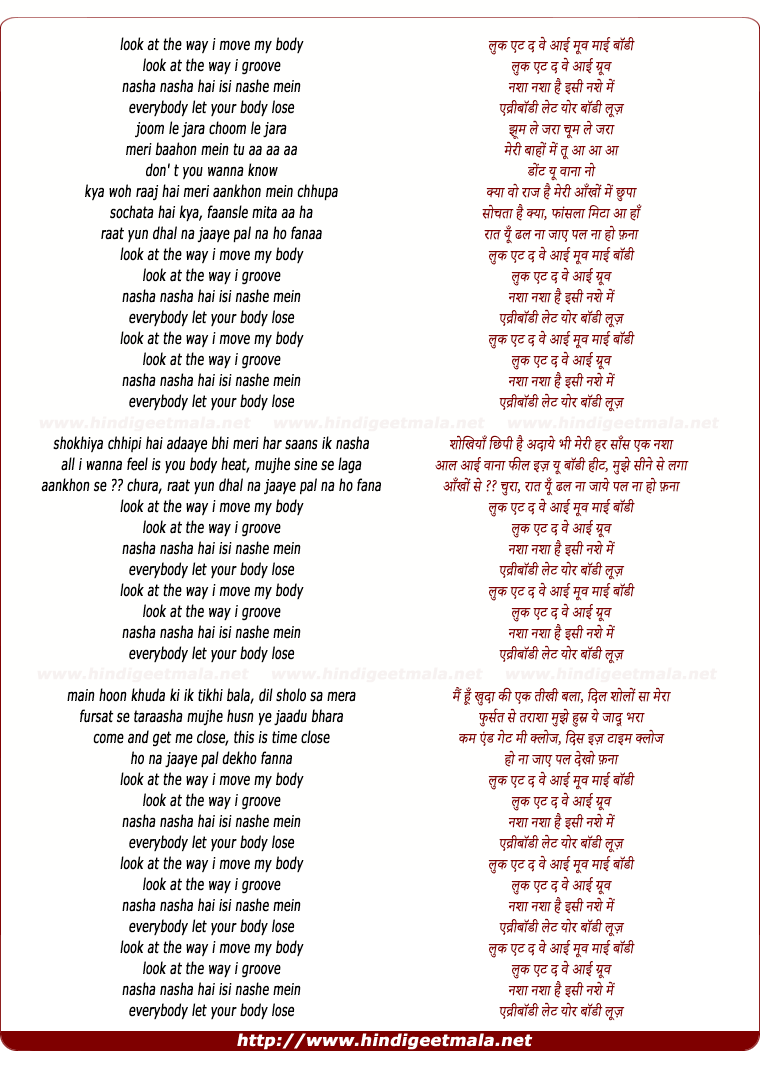 Comments on song "Nasha Nasha Hai Isi Nashe Mein"
Jasmine7X0X0 on Monday, September 07, 2009
India is Great! It has showed the most cultural side of India as well as the most westernized or more modern or young side of it. and this is the more young, modern or westernized side of India/ Bollywood.
TheDesigrl123 on Monday, October 05, 2009
i love this song its sooo freakin awesome!
lifezamazing1 on Thursday, April 07, 2011
arti chabria n kim sharma also starred in tumse accha kaun hain in 2002
opposite nakul kapur, dat guy who is famous for d music video, hogayee hain
mohabbat tumse in 1998, but now disappeared n arti chabria n sophie had a
cameo in shaddi no 1 released in 2005... tulip joshi's first muvi in 2002
mere yaar ki shaddi hain she did awesome job.. these 4 actresses hav
huge potential to rock bollywood.

TeekhaiVava on Friday, July 02, 2010
I wanted to say, yes, this video is great, and a work of art. The coreography is excellent, they have dressed well, danced well, probably rehearsed well. BUT it kind of reminds me of the songs of RACE and Katrina Kaif and Bhipasha Basu, similar body movements and short skirts. However, that may just be a coincidence.
TeekhaiVava on Friday, July 02, 2010
this video reminds me of race but that could be a coindence. similar body movements similar short skirts. However they have danced well, dressed well, and probably rehearsed so I am not saying they are copying RACE however they have similar dresses and movements no doubt. But good job anyway
View all 54 comments related to song Nasha Nasha Hai Isi Nashe Mein
Popular Links on HindiGeetMala